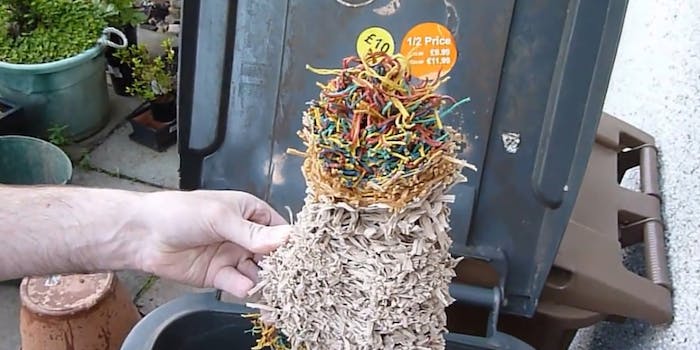 The rubber band ball is a classic solution to office workers’ boredom. Naturally, the bigger the ball is, the more down time the bored soul had at work that day. But what happens to these distractions when they’re no longer needed?

YouTube user Jordan and his dad had grown tired of their rubber band ball after a few years and decided to see what would happen if they cut it in half. The impromptu sphere was so thick that Jordan needed a saw to cut it open.

Jordan’s discovery made the front page of Reddit’s r/videos community, which itself is no doubt populated by terminally bored office employees. Jordan even appeared in the thread, under the username PneumaticPtarmigan, to offer some backstory.

“We’d built the elastic band ball together over the course of a few years but we’d kind of gotten bored of it,” he said. “We were wondering what would happen if somebody cut one in half with a sword or something but nobody had done it before, so we settled for the next best thing.”

“As for the poor saw form,” Jordan added, “blame my dad. I was the one filming.”

When you think about it, this is the perfect metaphor for a career spent as an office drone. Once you are free from being wound up so tightly by routine, workplace politics, and the like, all you really want to do is unexpectedly fly all over the place in a blaze of color before existence banishes you to the garbage.