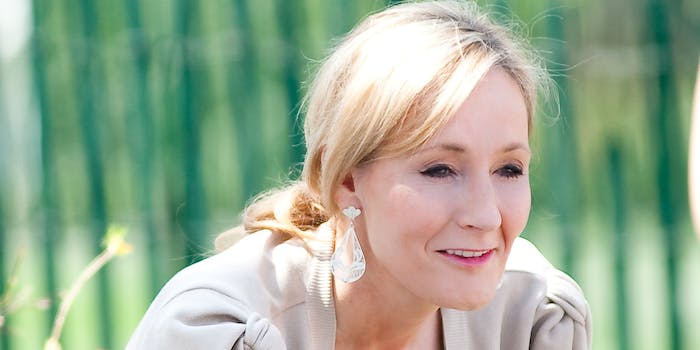 She knew these angry words were coming.

J.K. Rowling is known for her philanthropy, having famously given away so much money that she dropped off the Forbes billionaire list. Her latest high-profile donation was to the Better Together campaign, which opposes Scotland gaining independence from the rest of the United Kingdom.

Scotland’s future will be decided during a referendum on Sept. 18, when Scots will vote on leaving the U.K.

Rowling’s £1 million ($1.68 million) donation to the opposition campaign was accompanied by an explanation on her website, where she cites various reasons including Scotland’s aging population, depleted North Sea oil stocks, and concerns that Scotland’s medical research industry will be damaged by independence. She also mentions how conflicted she feels about the independence debate, highlighting that she feels sympathies with both sides.

“On the one hand,” she writes, “the Yes campaign promises a fairer, greener, richer and more equal society if Scotland leaves the UK, and that sounds highly appealing. I’m no fan of the current Westminster government.”

In all, it’s pretty calm and measured stuff. It’s probably outright boring to anyone who doesn’t have a vested interest in Scottish independence. Which is why the immediate backlash from many Scottish nationalists is shocking.

JK Rowling would have fucked Braveheart up and rode Robert the Bruce around like he was her bitch.

The independence debate is a hot-button topic at the moment, in part because the referendum isn’t until September and a lot of Scottish people are already sick of hearing about it. Last week, commercials for the pro- and anti-independence campaigns were pulled from Scottish cinemas due to the overwhelming volume of complaints from both sides.

Another filthy rich person backs the UK staying together. What a surprise. Fuck off JK Rowling, you absolute goon.

JK Rowling can get herself to fuck, politically corrupt as she & her rich Tory friends try to influence gimpy Harry Potter fans #VoteYes

Fuck you JK Rowling you whore

In a particularly aggressive attack on Rowling, one Scottish charity called her a “#bitch” on its official Twitter feed. Ironically, the charity is called the Dignity Project.

What a #bitch after we gave her shelter in our city when she was a single mum. http://t.co/6hYglHV2sk

A lot of these angry tweets refer to Rowling as a “Tory” or Conservative, which is inaccurate. Although the U.K. Conservative party is anti-independence, Rowling has often actively come out against Conservative social policies.

In 2008 she donated £1 million to the left-wing Labour opposition party, and has spoken out in favor of high taxes for the rich, referencing her own time living on government welfare benefits as a single mother. She described herself as “indebted to the welfare state,” and has no affection for the pro-austerity, anti-welfare policies of the current government.

The independence debate, however, is not a topic that can be easily divided along traditional lines like liberal or conservative. On the statement on her website, Rowling makes it clear that she’s concerned about Scotland’s future, rather than focusing on escaping the temporary influences of English Conservatives.

The response to Rowling’s Better Together campaign donation is an interesting microcosm of the way people are relating to the independence debate as a whole. Like Rowling, most Scots have very little affection for the current Westminster government, but have generally mixed feelings about Scotland’s potential as a wholly independent nation.

They’re also put off by the small minority of hyper-enthusiastic Scottish nationalists, as represented by the angry and misogynist backlash aimed at Rowling on Twitter. In fact, she actually predicted this reaction in the announcement on her website, writing, “there is a fringe of nationalists who like to demonise anyone who is not blindly and unquestionably pro-independence.”