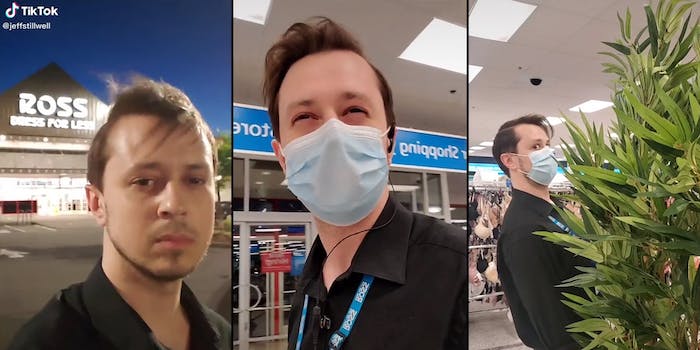 ‘I will spill my blood for this company’: Man’s parody TikToks get him sacked from Ross

This week, the internet confirmed Ross is not a great place to work.

A Ross employee in Portland, Oregon was fired after satirical TikToks about his job as a loss prevention specialist were detected.

In a May 11 TikTok, Jeff Stillwell, going by the name “Patrick Tubbs,” declared his loyalty to Ross Dress for Less, which is also where he filmed the TikTok.

“I will die for this merchandise,” he says in the clip, showing how seriously he takes his job (keys on his belt and his elbow). He sprints in slow motion and peeks over racks: “I will spill my blood for this company.” On May 14, he posted a similarly themed TikTok about his job, stating: “I am forever in the shadows, watching you shop.”

So, it is perhaps not surprising Stillwell was informed he was fired the next day. He told Willamette Week he knew he was in trouble when the first TikTok hit 5,000 views.

Stillwell, 29, says he picked up the loss prevention job six months ago to help with finances during the pandemic. He’s a filmmaker—his first TikTok is a parody of film students, and a less-viewed TikTok features Werner Herzog doing a Ross voiceover—and told Willamette Week though he felt a little too old for TikTok, he brought a YouTube sensibility to his content.

In a May 16 video, he addressed Ross CEO Barbara Rentler directly, citing all the “free publicity” he got Ross and asking to be hired back in marketing. Stillwell’s apparently already had offers from apparel companies to create content. But he’s still churning out Ross content, too.

What is it about Ross this week? On Thursday, writer Michael Harriot posted a viral thread about the worst job he ever had—a summer of chaos at “Boss Dress for Less.” He also cited the dreaded “in the back” conversation, which has been parodied on TikTok, but the thread has a truly wild finale that involves a Karen. And it illustrates the dysfunctional chain of command at many Ross stores.

We’ve reached out to Ross for comment on Stillwell’s TikToks.