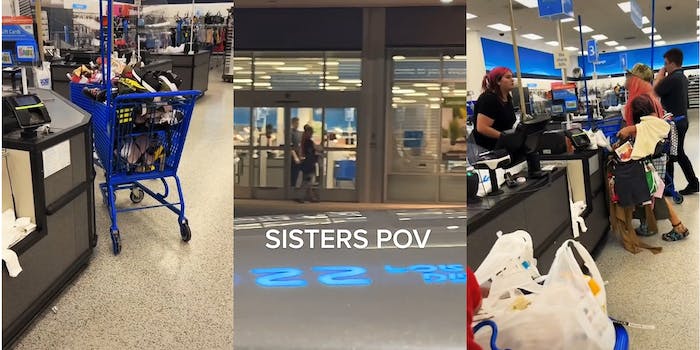 ‘This is a tactic’: Woman brings 3 carts full of items to Ross register after closing time—then the transaction doesn’t go through

Several viewers believe the woman was attempting to steal.

The average turnover rate for retail positions is a whopping 60%. One of the biggest reasons for employee dissatisfaction in these positions has to do with pay. While there are plenty of companies upping the hourly rates they offer to employees, many workers are still earning under $15 an hour.

There are also tons of examples circulating the web of employees at popular retail chains being subjected to poor treatment from customers who either make their jobs more difficult than they need to be, leading to frustration in the workplace and preventing them from performing other necessary tasks.

This could be why so many folks are commiserating with this now viral TikTok video that features a Ross Dress for Less customer filling up shopping carts with allegedly over $3,000 of product as the store is nearing closing time—only to have the entire transaction canceled.

Kayla, who posts under the TikTok handle @kayla.marx, wrote in the video’s caption: “almost 3000$ worth of stuff rung up for a canceled transaction.”

In the first TikTok uploaded about her experience with the customer, she shows off two shopping carts filled with shoes. Then there’s a cut to a customer with long pink hair arguing with employees in the store as she holds multiple hangers of clothing. “I’m gonna be done!” the customer shouts, saying, “don’t tell me no” to the Ross employees.

The video then cuts to more of the customer’s items with a text overlay that reads: “Not the ‘I forgot the wallet'” as people can be heard swearing in the background.

Kayla posted a follow-up video that showcased more of the retail drama. She captioned the video with: “so here we go with the ‘part two / context’ she brought down more shoes, was still shopping after store closedAND HER SCREAMING lol AND SISTER POV outside.”

An employee of the store can be heard saying, “Ma’am you’re still shopping and we are closed.”

The second video also shows more of the argument between the shopper and exasperated employees who tell that they are closed. They note that they didn’t have to stay open and process the transaction for her, which is why they were so frustrated that she continued to keep shopping.

Kayla’s sister was waiting for her in a car and recorded the aftermath of the interaction, which shows the customer staring at the store from its front doors as employees lock up.

The pink-haired woman continues to yell at the workers inside the store. “This crazy lady,” Kayla’s sister can be heard saying on camera.

The clip ends with the customer still waiting outside of the store.

Commenters on the TikToks expressed that they had been in similar situations before citing experiences such as this one as to why they no longer work in retail.

“I do not miss retail at all,” one viewer noted.

“No because I’d have to clock out immediately and meet her outside,” another said.

“Retail employees are under[paid] and have to deal with this,” a third user argued.

“This happened at my work ALL THE TIME and we were just expected to entertain the crazy people knowing full well they were not going to buy nothing!” one user said.

“So they’re closed closed and she just kept bringing up more and then said she forgot her wallet,” another viewer clarified.

There were many who questioned why the woman would be so adamant about filling up her cart with so many items, despite having her credit card transaction rejected. Folks in the comments section who said that they worked retail remarked that this is a common tactic used by shoplifters who are attempting to distract employees with large item transactions in an attempt to leave the store with some other items.

“This is a tactic. They do this on purpose so they can steal. Goodwill manager here,” one viewer suggested.

“They do that on purpose. They want to run out the door but then get scared,” another argued.

“They usually do this to cover up the fact that they are stealing something else and make an excuse to leave,” a third viewer agreed.

Kayla said in a comment that all of the employees who were working while the customer continued to bring items to the register believed that she was attempting to make a break for it without paying for some products.

The Daily Dot has reached out to Kayla for further comment.