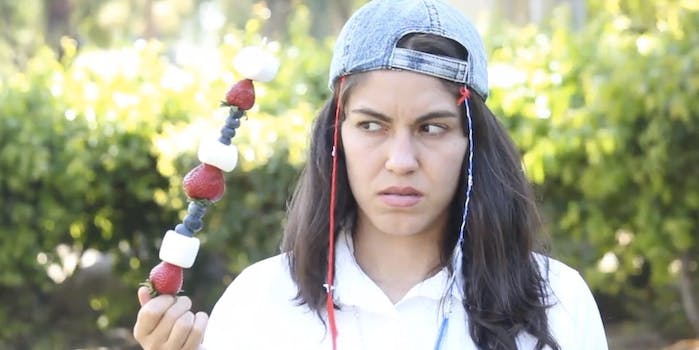 Forget “America the Beautiful,” “The Star Spangled Banner,” and even “Party in the USA.”

Forget “America the Beautiful,” “The Star Spangled Banner,” and even “Party in the USA.” There’s a new patriotic anthem sweeping the nation just in time for the holiday weekend—“Fourth of July” by YouTube rap newbie Rosa G.

OK, so Rosa G isn’t exactly a rap star. She’s a comedic creation of YouTuber Karla Solarte, who’s relatively new to her current channel but already crafting a stable of Latina characters. One is advice columnist Esmeralda Lopez de la Vega, who teaches how to use a hair tie as a means of seduction. Solarte is also one half of Gringo and Me, a YouTube sketch series that deals with the challenges of cross-cultural love connections. If you’re a big MKTO fan, you might also recognize Solarte from her stint as one of the love interests in their “Classic” music video. Fourth of July is definitely her breakout moment.

There’s a distinct Lonely Island feel to her performance (Andy Samberg, call her pronto), with lyrics like “Can you feel it? It’s that summer glory / When I get to celebrate USA’s story / Park turnt up and day’s just startin’ / I brought a picnic, this cheese is Havarti.” Rosa also shows off her best USA outfits; shirts with eagles on them; red, white, and blue pinwheels; and even a flag made of multiple Rosas waving at the camera. Rosa also promises it will be on iTunes for purchase soon.

So far, miraculously, the comments have kept away from the racism you might expect when a Colombian-born woman raps about patriotism and includes lines about empanadas. “The thing is that I was made in Colombia and perfected here in USA ;) ,﻿” Solarte replied to one commenter who jokingly said she should show this video if she ever faced deportation. That’s about as bad as it’s gotten, although we suspect when this video climbs in views over the weekend the trolls will come running. Stay strong, Rosa G! Your lyrics and size 10 shorts will keep us dancing through the holiday.