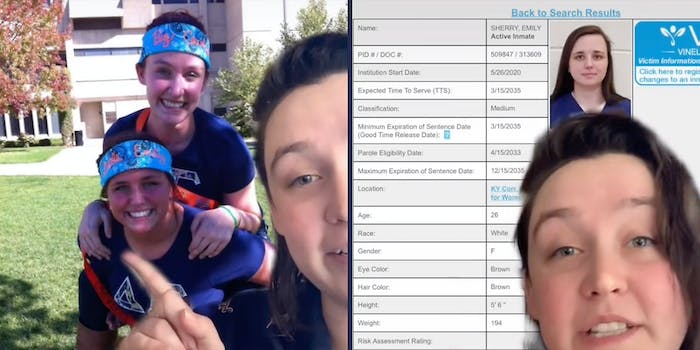 ‘I found out my ex roomie/sorority little was arrested’: Woman’s story about former roommate killing a neo-Nazi goes viral on TikTok

'So what was the crime?'

On Nov. 5, TikToker Caroline Walker teased a story: She posted just video of her face, with the caption “the day i found out my ex roomie/sorority little was arrested for Murd3ring a Wh*te Supr3macist.”

That TikTok has more than 3 million views.

Of course, the comments lit up with people urging her to dish: “Girl we missed a few chapters story time rn pls,” said one commenter. In a follow-up video from that same day, Walker obliged, relating that in 2018, she found out her former roommate and sorority sister, Emily, had killed a man in a drunk driving accident and been charged with murder.

That man just happened to be Robert Ransdell, a 2014 write-in candidate for Kentucky Senate who campaigned on the anti-Semitic slogan “With Jews we lose,” and coordinated the Cincinnati chapter of the National Alliance, a neo-Nazi organization.

An AP report from February 2020 details that the woman, Emily Sherry, pleaded guilty to a lesser charge of first-degree manslaughter, and was sentenced to serve 17-and-a-half years at the Kentucky Correctional Institute for Women. The report says her blood alcohol level was 0.422, more than five times the legal limit. Ransdell died at the scene.

While this is a horrific story, commenters on Walker’s story were divided: “Her divine powers of chaos,” said one. “Drunk driving is genuinely never okay. Like it’s so solid that she killed a white supremacist but drunk driving isn’t okay at all,” said another.

Some people also wanted to circle back to an earlier detail about Emily nearly killing her cat, which she also explained. Walker went away to Bonnaroo for a week and asked Emily to feed her cat. When she returned her cat had ripped into a bag of food, since she had not actually been fed by her former roommate.