Warning: This article contains explicit content and is NSFW.

Little annoyances abound when people share a living space. One person ends up buying a disproportionate amount of toilet paper, while the other silently suffers their roommate’s dubstep playlist in the wee hours of the morning. Maybe the dirty kitchenware piles up in the sink—or goes missing entirely.

But the mystery of Reddit user igotthejack’s vanished cups didn’t stay a mystery forever. As he succinctly noted in a post on r/WTF, with suitably gross photo evidence: “Turns out my roommate has been fucking them.”

Because confronting a buddy about this behavior IRL is so 20th century, the subsequent recriminations played out on Facebook for the world to see.

In due course, the cup-fucker—also, of course, a redditor, by the username of SqueezingStones—showed up to defend himself. And as you’d expect, he had no shame. “I am using my real account because, fuck it—I fucked a cup, I’ll just own it,” he wrote, going on to explain that this homemade sex toy was the result of a kinky hookup with a woman who didn’t want to have regular intercourse due to an especially heavy menstrual flow.

No doubt the roommates will now have to draft a new list of house rules, but even with all of the apologies, rationalizations, and promised gifts of fine whiskey, it seems that trust has been irreparably shattered here.

“I’m now sitting here thinking about everything that’s gone missing recently and whether or not he could have fucked it,” igotthejack wrote. “My sports shoes went missing a few weeks ago, would he really have fucked my shoes?” 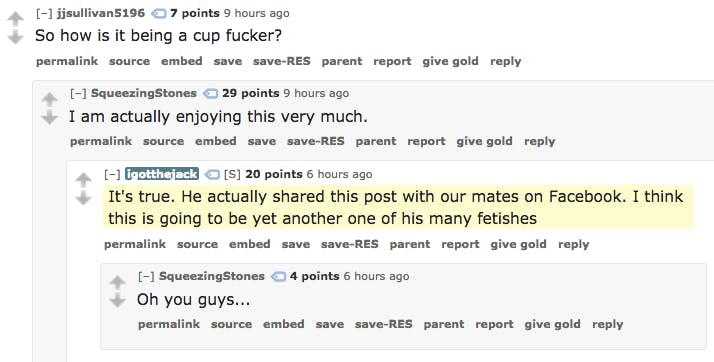 Let’s raise a (clean) glass to these two—they were meant for each other.

Photo via David Brown/Flickr (CC BY 2.0)