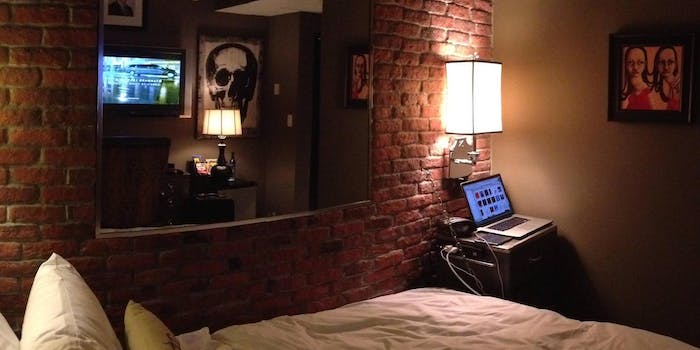 A Redditor discovered a room decorated with chains and skulls in a Houston, Texas hotel, and turned to Reddit to solve its mystery.

If you happen to be Houston, Texas, and are in need of a last minute hotel room, don’t try ZaZa Hotel… unless you’re into sleeping on a bed chained to the wall while a photo of a human skull stares down at you.

That nearly happened to a coworker of Reddit user joelikesmusic, who was forced to stay in ZaZa Hotel’s room 322 while on business.

“Hotel was booked solid and my colleague managed to score a room unplanned. We all had normal ZaZa style rooms (swank) and he ended up in this goth dungeon closet,” joelikesmusic wrote on Reddit. “We asked about it at the front desk and the clerk looked it up and said ‘that room isn’t supposed to be rented’ and immediately moved him.”

Joelikesmusic posted the following album on Imgur, where it has been viewed more than 269,000 times.

The images of the room have gotten Reddit’s conspiracy theorists buzzing as to its meaning.

“322 isn’t just relevant to Skull & Bones, but to a large number of collegiate secret societies. This doesn’t nail it to one society, but it would narrow it down some if that’s really the story behind the room,” cheops1853 added. “Interestingly, the guy in the portrait, Jay Cormeaux, went to LSU, which is home of The Friars. They’re a secret society whose symbol also includes the skull and crossbones.”

As it turns out, the room is not as big a secret as people think, nor is its backstory as interesting. The room is called “Hard Times” and is one of the many themed rooms offered at ZaZa, hotel spokeswoman Kyra Coots told the Houston Press.

“Coots also told us that, at one point, the company’s president lived in the Hard Times room for two months, five days a week,” Houston Press added.

“While it’s a ‘compact’ room, it has one of the hotel’s largest balconies, which overlooks the pool area, she said. (The other side of the hotel features another compact theme room, called Ship’s Cabin, which resembles a yacht and also overlooks the pool). She says neither room is secret or kept from being rented.”