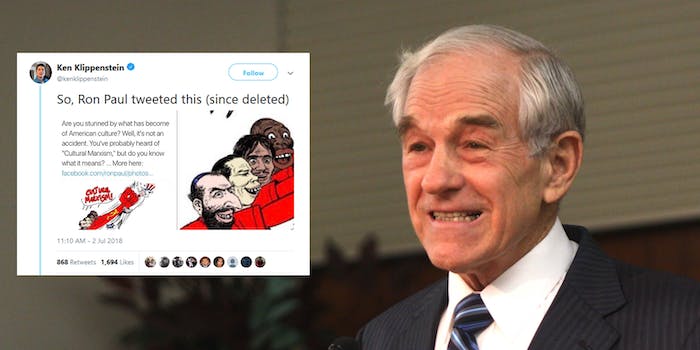 Former representative Ron Paul is being criticized online for sharing, then deleting, a racist and anti-Semitic picture in a tweet where he was lamenting the rise of “cultural Marxism.”

In a Facebook post that was linked to the tweet, Paul said Marxists were trying to “destroy the culture” of capitalist countries and were going to use that “opportunity to change the government and economies to the Socialist utopia.”

“How do you think they’re doing? Had enough yet? Then don’t be afraid to stand up for truth, and speak it!” Paul wrote. “Otherwise, history can most definitely repeat itself. And the history of Socialism is as nasty and brutish as it gets. Nothing compares to it in terms of human suffering.”

While no one would bat an eye to Paul, who ran for president in 2008 and 2012, hemming and hawing over socialism, a picture that the former representative first used to illustrate “cultural Marxism” was swiftly criticized for being racist and anti-Semitice .

The photo originally accompanying the tweet showed Uncle Sam being punched with a red first with the hammer and sickle on it. The hand belong two four racist caricatures: of a Jewish man, a Black man, and others.

The Jewish caricature is known as the “happy merchant,” the Hill points out, and is used in anti-Semitic forums online.

Paul, the father of Sen. Rand Paul (R-Ky.), deleted the photo and replaced it with a picture of the words “political correctness” with a “no” sign across it.

Recap for those following at home. Over the past few weeks:

Ron Paul’s gonna Ron Paul (and by that, I mean, ‘be insanely racist.’)https://t.co/6zQZ5izKIB

can't imagine why a bunch of the Ron Paul fanboys went from libertarian to white supremacist https://t.co/xVR0lKRtIY

Of course, it shouldn’t be shocking that a racist cartoon would be tweeted by Paul. He was also criticized during his presidential campaigns for newsletters that were riddled with racially-charged language he wrote in the 1990s, according to the Washington Post.