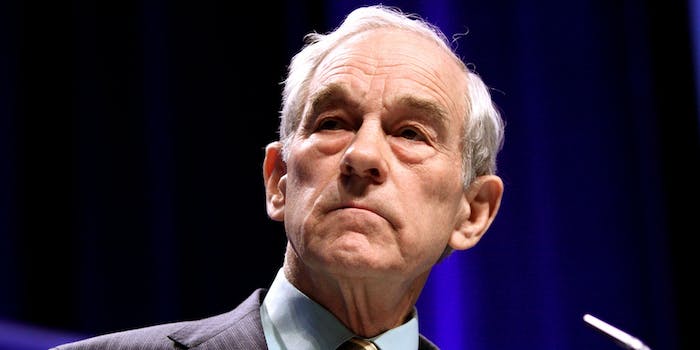 Shortly after Edward Snowden came forward with his bombshell revelations about the National Security Agency‘s top-secret data gathering last summer, few were surprised to learn that the former NSA contractor was a big fan of congressman and libertarian stalwart Ron Paul.

It appears that the feeling is mutual.

This week, the three-time presidential candidate started a petition seeking clemency for the NSA whistleblower, arguing that his actions were “courageous” rather than treasonous.

“Edward Snowden sacrificed his livelihood, citizenship and freedom by exposing the disturbing scope of the NSA’s worldwide spying program,” Paul said in a video released on his website.

“Thanks to one man’s courageous actions, Americans know about the truly egregious ways their government is spying on them.”

The petition demands that the United States let Snowden back into the country before his temporary asylum in Russia expires in July.

In the video, Paul praises the ensuing fallout of Snowden’s leaks, arguing that the former system analyst’s revelations have spurred condemnation from foreign nations and sparked legislative efforts to reign in the NSA’s broad mandate to collect Internet and phone communications data–even on its own citizens.

“By signing this petition, you are telling the U.S. government that Mr. Snowden deserves the right to come home without the fear of persecution or imprisonment,” Paul says.

It’s unclear how many signatures the petition has already garnered.

This is hardly the first time that Paul has shown support for Snowden. In June of last year, following Snowden’s first leaks about the NSA’s PRISM program, Paul expressed admiration for the then 29-year-old, mixed with fear that he might be subject to violent retribution from the U.S. government.

Likewise, Snowden is an apparent supporter of Paul, having donated a total of $500 to the libertarian-leaning Republican’s 2012 campaign for president. Paul and Snowden have both expressed strong skepticism about the heavy hand of U.S. interventionist foreign policy.

Snowden is also backed by another member of the Paul clan. Sen. Rand Paul (R-Ky.) filed a class action suit earlier this week against President Barack Obama, the NSA, and other government parties involved in data gathering.

Since August, Snowden has been living in Russia under temporary asylum. He has applied to dozens of other countries seeking permanent asylum to no avail, partly because of heavy diplomatic pressure from the United States.

Even the president himself seems spurred by Snowden’s leaks, recently calling for NSA reform in his state of the union address. However, Obama has been steadfast in his refusal to pardon the former contractor for his espionage charges.

“Our nation’s defense depends in part on the fidelity of those entrusted with our nation’s secrets,” the president said at a press conference last month. “If any individual who objects to government policy can take it in their own hands to publically disclose classified information, then we will not be able to keep our people safe, or conduct foreign policy.”