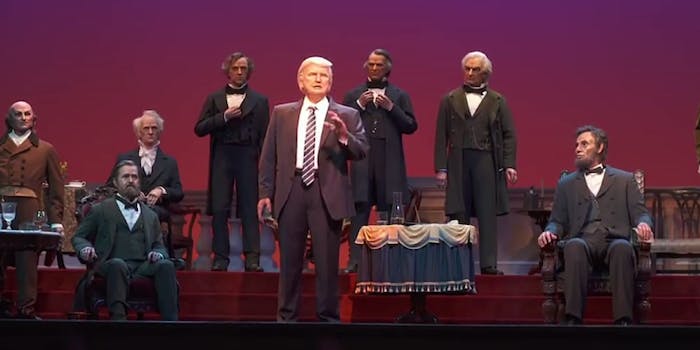 Somebody Photoshopped the Donald Trump robot into real-life scenarios, and it’s terrifying

By now, it’s no secret that the animatronic Donald Trump that’s been unveiled at Disney World is, to be kind, a bit strange looking. Significantly gaunter than the current commander-in-chief and with a piercing, haunted stare that leaves an entirely different unsettled feeling than watching the genuine article, it’s pretty much world-class meme fodder. As such, it was bound to happen that people would start photoshopping the awkward robot Trump into an array of real-world images.

Twitter user @bornmiserable, however, has outdone themselves in pioneering the form. In a series of tweets on Friday, they put together several Photoshopped images of the automaton Trump taking the place of the real thing, and it’s fair to say that they leave a strong, lasting impression.

I replaced .@realDonaldTrump with his Disney animatronic figure and honestly, it's an improvement pic.twitter.com/o0G12K22bH

one more, just because I can: pic.twitter.com/7tj3gO3lu3

requested by a few, here's the "orb" photo: pic.twitter.com/cc7wyRjTyM

The images have gone viral, and it’s not hard to see why. Ultimately, these Photoshopped pictures might not be the most flattering commentary on whoever designed the Trump robot―the one of him grasping the orb is probably the one that looks closest to reality, although it’s still off by wide margins―but they’re something anybody who appreciates a good visual gag can enjoy.

The actual Trump robot was unveiled at Walt Disney World in December, and it elicited some startled and horrified reactions on social media, including some theories about why it doesn’t look like the authentic Trump. The most popular explanation, albeit totally unconfirmed and speculative, was that it was originally designed as a Hillary Clinton robot, then converted into a Trump robot, to relatively poor effect.

Of course, that’s all purely speculative. But the important point is this: There’s a strange-looking animatronic Donald Trump standing in the Disney World Hall of Presidents right now, and people are making all kinds of fun at its expense, both through viral tweets and “lock him up” chants.