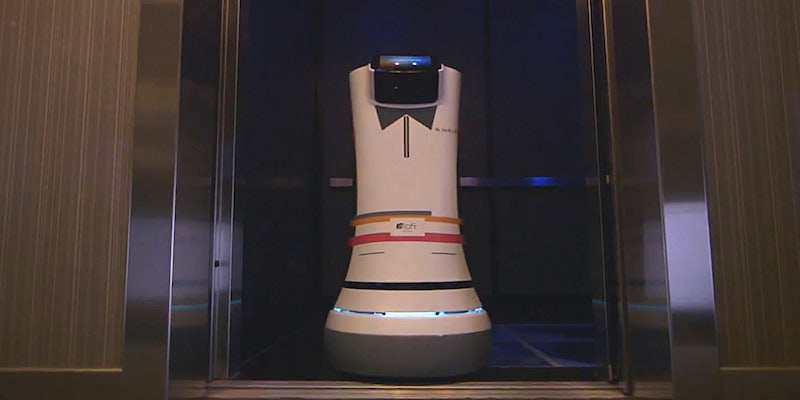 What Zuckerberg’s robot housekeeper means for the modern family

Is the American family being priced out of the future?

For his New Year’s resolution, Mark Zuckerberg is skipping the gym.

Instead, the Facebook CEO plans to build himself an artificially intelligent robot to help out around the house and tend to his newborn daughter, Max. Though many have compared it to Jarvis, Iron Man’s Tony Stark’s robot butler, the technology will be less like the humanoid servants of Ex Machina and USA’s Humans than Disney’s Smart House brought to love. Zuckerberg wants “to let guests into his home and check in on any disturbances in Max’s room when he’s not around.” According to Wired’s Issie Lapowsky, “it’ll do all the usual smart home stuff like control the temperature, lights, and music.”

Zuck’s planned innovation is one of a number of devices (including the Amazon Echo) designed to make home life a little simpler—cutting down on the time we spend needlessly fussing over children, managing climate control, or even flipping a switch. It’s the perfect innovation to help run a busy household, but innovations like Zuckerberg’s aren’t made for June and Ward Cleaver or Donna Reed. Instead they speak to an America where consumers—especially middle- and lower-class families—are priced out of what we were told the future was going to be.

The Jetsons envisioned a world in which the average American family had helpful machines at their disposal; it was a class-blind universe in which the future looked the same for everyone, whether you were a powerful CEO or just an average worker at Spacely Space Sprockets, trying to support your wife and two kids. Technology is supposed to be a democratizing force, that which brings the benefits of the wealthy to the many, but intelligent machines like Rosie are likely going to be reserved for the very rich. Instead, our technological age only exacerbates the very divides it was intended to conquer.

Technology is supposed to be a democratizing force, that which brings the benefits of the wealthy to the many. Instead, our technological age only exacerbates the very divides it was intended to conquer.

After Google Glass debuted on the market in 2014, Motherboard’s Ben Richmond wrote that Glass was an unfortunate symbol of our current era—in which only the very wealthy can dream of driving a hovercar to ride to work; everyone else just has to take the bus. In a world where buying into Google’s definition of “the future” comes with an $1,800 price tag, what we were told the 21st and 22nd century would look like is only available for those who can pay up. Google Glass failed, but it was just the beginning.

The advent of Google Glass had little impact on America’s families (can you see your grandmother buying a ridiculous wearable?), but the pricey onslaught of the Internet of Things will affect the future of every household in America.

A brand new Tesla Model S—brought to you by eccentric billionaire futurist Elon Musk—retails for around $63,570. Musk’s electric car technology is heralded as the personal transportation vehicle that will guide America toward clean energy, but here’s the problem: According to an NBC News report, most Americans can’t afford any new car, let alone one that’ll set you back two years of tuition at a private university. If it’s between the car of the future and playing your bills, most families are going to choose the latter.

If the future is proving too expensive for most families, these digital divides among consumers are only growing. These dichotomies are prevalent everywhere from household computing to the technologies we employ to manage every aspect of our lives—from GPS to what kind of smartphone we use As a 2014 survey from Mapbox showed, poor consumers predominantly favor less expensive Android devices, while wealthier tech users own iPhones. My mother—who works at a gas station outside of Dayton, Ohio—owns the free smartphone that came with her Cricket plan, because she doesn’t really the expendable income to be up to date.

Most American families are forced to make these everyday decisions, and they will prove costly in a world increasingly driven by the Internet. Although CNet reports that “over half of home computer users reportedly have high-speed Internet access at home,” many of those who remain offline are in impoverished and often rural areas that lack the infrastructure for connectivity. According to 2012 statistics from Pew Research, just 60 percent of Americans who earn less than $30,000 a year have high-speed Internet. Those lacking broadband are predominantly Black and Latino.

Social media platforms like Twitter are giving historically marginalized communities—whether that’s people of color or America’s poor—unprecedented tools to make their voices heard, but in many ways, the wired age continues to work against disenfranchised populations. As Al-Jazeera’s Golda Arthur reports, the digital divide is only deepening income inequality for many Americans, who can’t search Craigslist for job postings or utilize the resources of the Web to lift their families out of poverty.

Whether it’s bringing Internet to third-world countries via Google balloons or helping American families enjoy a little more free time, accessibility will, thus, be key to ensuring that the digital age is the great equalizer we intend it to be.

Whether it’s bringing Internet to third-world countries via Google balloons or helping American families enjoy a little more free time, accessibility will, thus, be key to ensuring that the digital age is the great equalizer we intend it to be. This is an important lesson that disrupters like Mark Zuckerberg should heed, precisely because it’s the reason that Facebook took off in the first place. As a completely free service—one funded by advertising—signing up for a Facebook account is as easy the click of a button. I only wish that enjoying the benefits of the future were that simple.

I don’t want Mark Zuckerberg to bring back the leisure class—giving the rich ample play time at the expense of everyone else—or to remake the American home in Google Glass’s image. Instead, let’s make luxury, comfort, and convenience—in the form of our own eager robot helpers—available to every family.