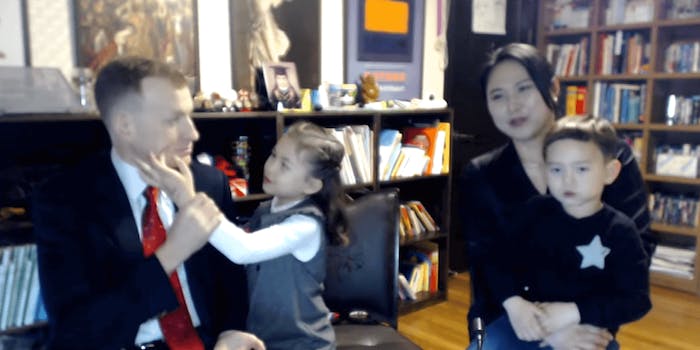 Family whose children crashed viral interview is back

You might remember Professor Robert Kelly (not to be confused with intentionally hilarious comedian Robert Kelly) as the man who went viral back in March of 2017 when his children crashed a live interview he was doing with the BBC.

If you need a quick memory refresh, Kelly, who lives in Busan, South Korea, was being interviewed about the South Korean president being removed from office and how that might affect the stability of the region. That’s when the children show up, followed by their frantic mother. It turned what was a rather serious interview into one of the greatest pieces of physical comedy ever accidentally produced.

The video, of course, went viral. The BBC did another interview about the interview, and Ellen DeGeneres broke it down perfectly on her show (who knew the mom’s pants were undone?).

Now, almost exactly three years later, the family is back. The BBC asked the family what it’s like living in South Korea during the COVID-19 outbreak. You don’t even need to turn on the sound to get the answer. It seems things haven’t changed much in the Kelly household.

Professor Kelly, like many people around the world, is trying to work from home but says he’s getting “maybe 2 hours” a day in while trying to deal with his, obviously high energy, children. “It’s very difficult,” said his wife, Jung-a Kim. It’s a feeling a lot of parents can relate to, especially right now.

Things are hard right now, but moments like this at least help us laugh when we need it most.