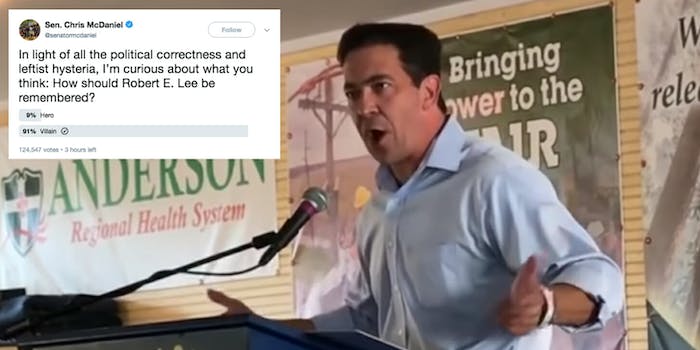 It wen't over as well as you'd expect.

Chris McDaniel, a Republican in Mississippi running for Congress, is learning that sometimes Twitter polls aren’t the best way to get an answer you want.

Especially if the answer you want is a warm embrace of the Confederacy.

McDaniel, apparently believing there was too much “political correctness” and “leftist hysteria” in the world, decided to ask his 12,300 followers on Twitter on Thursday how Robert E. Lee—the Confederate general at the heart of many Confederate statue debates—should be remembered.

In light of all the political correctness and leftist hysteria, I’m curious about what you think: How should Robert E. Lee be remembered?

If that wasn’t enough, the Robert E. Lee tweet was completely ratioed, generating more than 5,000 responses compared to just over 1,000 likes.

First, he retweeted someone who said it was “too bad” the liberals voting aren’t from Mississippi because “all they can do is moan and complain while we actually can vote you in, stay strong.”

Then, to cap it off he continued:

“One more quote, then I’ll move on to the next liberal outrage du jour. “We recognize Robert E. Lee was one of the greatest American Christians and one of our greatest American gentlemen.” – President Franklin D. Roosevelt,” McDaniel wrote.

Owning the libs with old quotes is the surest way to win an argument.