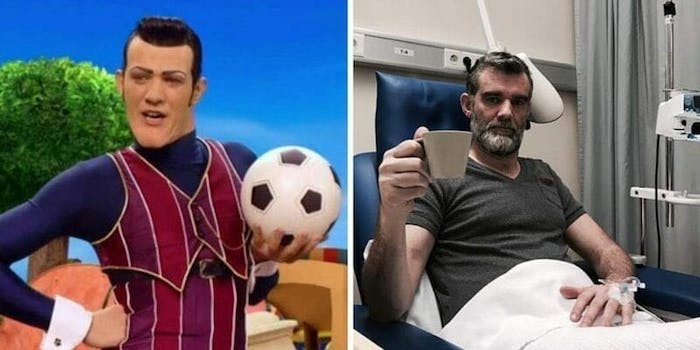 This is going down in history!

Stefan Karl Stefánsson, the actor behind legendary kids’ show villain (and meme) Robbie Rotten, is currently dealing with stage 4 pancreatic cancer and may not have much longer to live. Heartbroken fans, especially those on Reddit, where Stefan Karl’s LazyTown baddie is especially beloved, have raised thousands of dollars for his family and his medical bills. Now, they’re working to immortalize him with a statue in his hometown of Hafnarfjörður, Iceland.

A Change.org petition, started by redditor and longtime LazyTown fan Adem A., pleads “Please help get this man something as simple as a statue in his hometown to honour him. Please help this go down in history.” (“Going down in history” is, of course, a reference to Robbie Rotten’s signature song “We Are Number One.”)

More than 65,000 fans and counting have answered the call, asking Iceland’s president and prime minister to memorialize Stefan Karl in statue form. The petition also reached the front page of Reddit.

It could happen! He’s one of Iceland’s most famous actors, and has even been called “the Icelandic Jim Carrey”—which makes sense, because he and Carrey have both played Dr. Seuss’s Grinch (Carrey on screen, Stefan Karl in the touring stage production).

It’s not clear what the proposed statue would look like—would it be Stefan Karl as villain #1 Robbie Rotten, or as himself?—who would design it, where it would be placed, or how much it would cost, but the fans’ hearts are in the right place. And they’re also still donating to his GoFundMe page for medical expenses, which has raised more than $150,000.

Meanwhile, Stefan Karl has been released from the hospital for the time being and celebrated his 42nd birthday by taking a helicopter ride with his family in Iceland, according to his Facebook page.