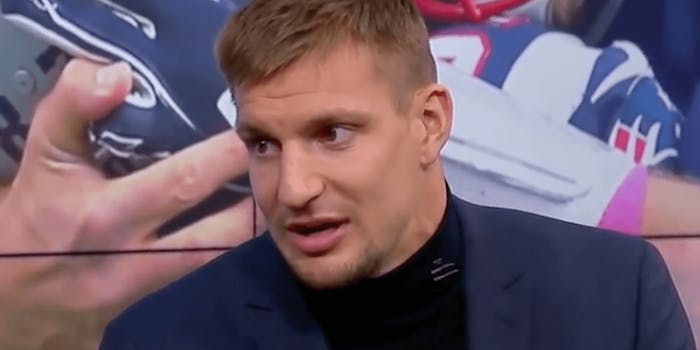 Gronk's turtleneck is the real MVP.

Former New England Patriots tight end Rob Gronkowski has wasted no time starting his post-Hall-of-Fame career. He’ll be remembered for his giant hands, road-grader run-blocking, and monster touchdown spikes; but it came at a significant physical cost. After retiring following his third Super Bowl last season and capping an injury-laden, but dominant, nine-year stay, the “Gronk” decided it was time to press on, into new, more fun entertainment ventures.

And Sunday, the three-time Super Bowl champion took on a new role as a football analyst for Fox Sports’ “NFL on Fox” broadcast. His insight and excitement for the game were contagious, rubbing off on hist Curt Menefee, and former stars, including Michael Strahan, Howie Long, Tony Gonzalez, and Terry Bradshaw.

However, Gronk’s turtleneck—which it appears he’d never worn before—was the real MVP, making the all-pro the stuff memes are made of. As Christian Arcand noted on Twitter, he looked like a Russian hitman.

Why is Gronk dressed like a Russian hitman pic.twitter.com/zeBxJzW4WF

Some thought he looked like a future Bond (or Austin Powers) villain:

Gronk on set looking like an evil Bond character. pic.twitter.com/zwVgrexyBP

“No, Mr. Bond, I expect you to die.” #gronk pic.twitter.com/RmcvJrpvW5

if you combine Number 2 and Scott Evil from Austin Powers, you get 2019 Gronk pic.twitter.com/fkMEP3n6WC

Some made a note of Gronkowski’s sidestepping of hair and makeup:

I genuinely want to know if Gronk declined hair and makeup pic.twitter.com/SX5dXXhWVt

Gronk slowly transitioning to his next phase of life as Gary Busey pic.twitter.com/iPiIUKz81y

It’s almost a guarantee that Gronkowski will be back on your screen in the near future; he’s simply must-watch television.