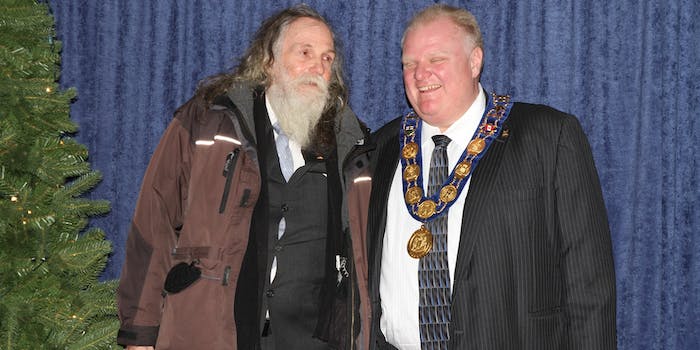 Of course, Ford’s wild night was documented spectaculary on Instagram.

Embattled Toronto mayor Rob Ford, lover of crack cocaine and tickles, ended an already wild month with a bang and a jaywalking ticket. Ford was in Vancouver for the funeral of the mother of his former staffer, David Price, and hit a bar called the Foggy Dew afterward.

The place was packed. Phones came out, and #robford selfies began to hit social media. “When you’re at the bar and #robford shows up #foggydew #legit #drinking #party #epic #epic #fun #party #vancity,” one patron wrote on Instagram. Another: “Best mayor ever.. just going off in the club #ROBFORD.”

Ford eventually lost sight of the crosswalk, and the Royal Canadian Mounted Police ticketed the pride of Toronto for jaywalking.

Speaking to the Toronto Sun, Ford denied Twitter rumors that he was cited for public intoxication as well. All he’d had to drink was a Diet Coke, he said. It doesn’t hurt that he really does look like this when he’s sober:

A photo of Rob Ford tonight, during the time he was reportedly being ticketed for jaywalking and public intoxication. pic.twitter.com/Q7yTo76SPE

Here’s what an Instagram search for #robford brings up:

Big month for Ford. As the Wire notes:

He announced his run for re-election (despite…well, everything), was filmed drunkenly swearing in a Jamaican brogue at a fast food restaurant in Toronto, and got stuck in an elevator while running an hour late to a speech. As it’s well-known, 2013 wasn’t so great either.

Hey, when drunk fans flock to take selfies with you, your reelection chances aren’t totally dead.