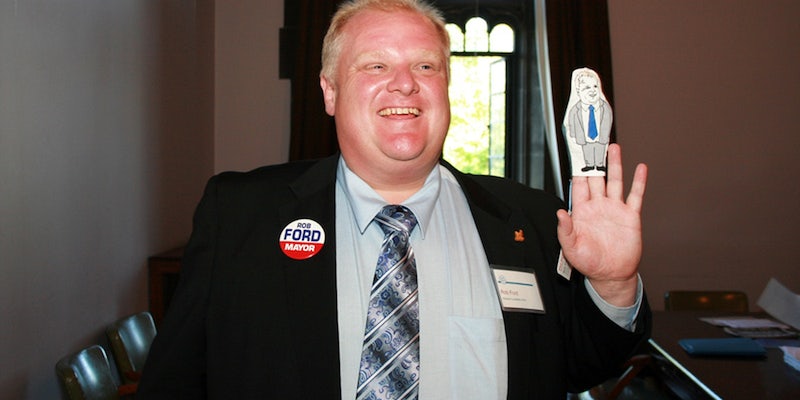 Trying to put his crack scandal behind him, Toronto's mayor now faces accusations of hiring a hacker.

Rob Ford, the embattled mayor of Toronto, has been plagued since May by rumors of a video that showed him smoking crack cocaine. Those allegations of drug use got a lot more serious last week, when police recovered the video, which has reportedly been viewed by at least four journalists.

With the tape apparently unlikely to disappear again—as it did this summer after Gawker Media raised $200,000 to buy it, only to see the supposed owners vanish before the deal went through—Ford finally broke under questioning from reporters today.

“Yes, I have smoked crack cocaine,” he admitted, “Probably in one of my drunken stupors, probably approximately about a year ago.”

In a press conference, Ford apologized for his transgressions and announced he would not resign as mayor.

“I know what I did was wrong, and admitting it was the most difficult and embarrassing thing I’ve ever had to do.  Folks, I have nothing left to hide.  I would do anything, absolutely anything to change the past.  But the past is the past, and we must move forward,” he said.

Ford’s apology only addressed his confession that he had smoked crack, and didn’t include a mention of the racist and homophobic statements he’s accused of making on the same video.

To further complicate matters, Vice reports that Ford’s communications director, Amin Massoudi, hired a hacker in May in an attempt to suppress the release of the tape.

“Man… half my point was to keep this discrete, makes it hard to do when you drop your first name in the email.. smh,” the hacker responded.

Vice unfolds a tale of increasing offers of pay—including an offer to outbid Gawker’s $200,000 if the tape was removed from the server Ford’s office believed held the final copy—and threats to bring more hackers into the project if their original contact couldn’t deliver.

The hacker says Massoudi broke off their correspondence after it became clear the video wasn’t going to be deleted, but made an offer to “keep doing stuff like this in the future.”