'You are just like a rat jumping around the corner looking for a food!'

If you haven’t heard of @rjoy1919, here’s the deal: She’s 47 years old, a staunch Donald Trump supporter, and quickly taking over the Internet with her fuck-the-haters mentality.

In her most popular Twitter video, she’s not afraid to call out the people trying to bring her down. Posing for the camera and giving tons of face, Rjoy says, “Hi losers. You’re telling me I’m obese? Really? You don’t know what you’re talking about. Please, you’re jealous because I know I’m beautiful, you’re not. You’re jealous. You are just like a rat jumping around the corner looking for a food! Very jealous.” All this while a remix of Adele’s “Someone Like You” plays in the background.

The Daily Dot caught up with Rjoy, whom we’ll call Joy, a self-described businesswoman married to a police officer and living in Tampa, Florida. She didn’t want her full name released, lest her clients learn about her secret life of calling out losers on the Internet.

She was originally born in the Philippines and moved to Japan when she was 15. In 2003, Joy decided to move to the United States with her son so they could both learn English. He’s now turning 23 and recently got his bachelor’s degree from a college here in the states. She got her American citizenship in 2012.

Last year, Joy went back to visit the countries she had left over a decade ago.

“I went to Japan last year and I went to the Philippines as well. That’s how I realized how much I appreciate America more,” she said. “Whatever I build in America, I have a lot more opportunities.”

"You're just like a rat jumping around the corner looking for a food" –@rjoy1919 , a living legend

And that has led her to support presidential candidate Donald Trump.

“I see Donald Trump and really, really love this man to be the president because I’ve seen that the people in America are very spoiled and do not appreciate what they have,” she said. “Since that I’ve started filming myself on video and I’m a Donald Trump fan. I get a lot of bad people calling me names, threatening me.”

That pushback is what inspires Joy to continue filming more videos—always shutting down the haters. But while the confidence and ethos she embodies in these videos have gone viral, there seems to be a disconnect with her accumulated fans, who may be unaware about her voting preferences.

For example, one video posted to Tumblr earlier this week has over 50,000 notes. The original post has the caption “y’all sistrens WISH you could call someone out like this.” Joy’s sheer self-assurance is what’s so appealing. Someone who scrolls down to this video on their dashboard or Twitter timeline lacks the real context: She’s fighting off people who came after her for supporting Trump.

In fact, the most popular videos don’t reference Trump at all—they just feature Joy fabulously firing back at trolls who called her names and made fun of her teeth.

If you do track down her Twitter and check out the bio, it does say, quite plainly, “VOTED FOR DONALD TRUMP.” On the Internet, where people are purposely outrageous for laughs, it’s best to be a little skeptical, especially when it comes to Trump’s possible presidency, a topic that has fueled many ironic jokes. But after talking to Joy on the phone, her admiration for the businessman is clear. She said she fully backs Trump and his stance on getting rid of undocumented peoples, having waited years to gain her American citizenship.

“He has goals and plans and when I see this, I support this man, he loves this country this so much,” she said. “I went through hell with this immigration stuff. You’ll see them helping illegal immigrants, giving them food stamps, it’s just not right.”

There’s the untold backstory of Joy and her beliefs. Meanwhile, people continue to enjoy her videos, becoming disciples of her “bye losers” mantra. They call her “legend” and “queen,” among other things. There’s even a Twitter account called rjoy1919FANPAGE.

it's been two days & i haven't for a second stopped thinking about this incredible monologue https://t.co/Zw91ZpxDZx

Others seem conscious of Joy’s pro-Trump stance. Someone made a music video with footage where she’s very clear about her support for the candidate, sings about her affiliation, and weighs in on Hillary Clinton. Her anthem for Trump, though, has a measly few hundred retweets and likes, a fraction compared to Joy’s original videos. And if anything, those woke to her love for Trump have spun that into a meme itself. 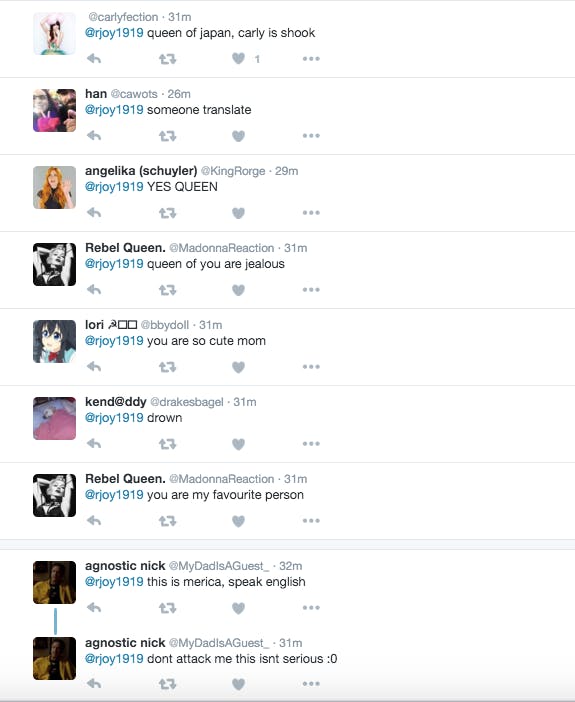 “All these kids on the Internet bullying, I’m 47 years old, you can’t bring me down, call me names, I am teaching these kids how to be strong,” she said. “I was not expecting this, but I do want to really express myself.”

Joy seems to have gotten big on the Internet without realizing it. She only started a Twitter account in February, and I had to explain the concept of a retweet, as well as the fact that just one of her videos has over 24,000 retweets. She said that one of her daughter’s high school friends recognized her on Twitter. And even some of her clients have approached her about her antics online.

Her Twitter timeline is full of replies to those who @ her, reposts of some of her videos, along with a hodgepodge of various retweets and likes. She’s gotten so big that she caught the attention of Twitter king Ezra Koenig, having tweeted her “hi losers” video at him in response to a random tweet.

“I’m not scared by all these haters. I make videos to show myself,” she said. “I’m not trying to be on a reality show, but I’m a real person in a real world.”

While the Internet continues to praise Joy’s style, she’s just concerned with being her truest self. And that, of course, includes what kicked off her Internet presence in the first place: affection for Trump and his ideas about how to fix the adopted country that she adores.

“I don’t tell people who to vote, but i’m just letting you know my political views. … We can educate other people that they need to love themselves and I love this country very much,” Joy says. “He just wants to clean up his country and I want to be proud to say I’m an American citizen.”