The rise of the channel, or the Bright Young Things of YouTube

A new generation is changing how we think of Web TV.

When we think of “media empires,” we tend to think about the big dogs, most of whom—for whatever reason—also seem to be complete asshats. Murdoch. Cuban. Turner.

But now there’s a new generation of media moguls quietly changing that paradigm, revolutionizing the concept of a media empire by going straight to the end user with a ultra-specialized menu of content. They are doing so by turning old media’s power into a handicap: that of the need to appeal to the masses.

Of this new generation, Chris Hardwick and Felicia Day in particular stand out. Just off to the side of the mainstream, these self-proclaimed mega-nerds have quietly amassed legions of fans who in return have crowned them the undisputed King and Queen of Geekdom. By most accounts, Hardwick and Day are wholly likable people who’ve never been called asshats. And now, with a combined Twitter following of over 3.5 million, the two likeable nerds are placing their eggs in the undeniable biggest basket of web video: YouTube.

In February of 2005, the world of online entertainment as we know it was born. YouTube launched, and we all sat in awe watching two Asian kids in basketball jerseys mime the lyrics to the BackStreet Boys. No one could have imagined just how powerful YouTube would become, or how many college educations would be funded by the likes of “David After the Dentist.”

And while it’s true that the mainstay of casual YouTube viewers are still predominantly drawn in by one-off phonemes like “Gangam Style” or “Charlie Bit My Finger,” creatives like Hardwick and Day are reinventing the way we use the YouTube channel.

Back in the “Evolution of Dance” days,  a YouTube Channel was little more than a makeshift “user homepage” that didn’t do much more than compile a users posted videos in one place. That was then, and this is now: Web media mini-moguls are giving their channels weekly and daily schedules, providing new content in time-specific slots in the grand tradition of “if it’s broken, steal it and fix it.” They are taking their cues from the beast itself—primetime TV.

A little background on these two YouTube powers-in-the-making: Chris Hardwick is the guy behind the now nearly mainstream brand Nerdist. With a website, a long running podcast, a spot on BBC America’s Ministry of Laughs, and the coolest underground comedy club in LA (in the back room of a comic book shop, obviously), the Nerdist brand has taken over the geek world. Sci-fi and horror are the bread & butter of Chris’s “nerd media empire,” a term that’s attached itself to Nerdist Industries like a baby alien sucking John Hurt’s face. (Yes, I just dropped that Alien reference. These are my people.)

The reigning queen of the ultra-geek realm is Felicia Day, who early in her career had the good fortune to be touched by the King Midas of geek culture, Joss Whedon. Day had a role in the wildly successful Buffy the Vampire Slayer, and later played “Penny” in the Internet mega-hit “Dr. Horrible’s Sing-a-long Blog.” Day is best known now as the girl behind The Guild, the successful and long-running comedy web series about a group of misfits who find friendship through an online game they play via webcams and headsets. The show, which is only slightly funny if you’re not a World of Warcraft gaming geek, receives as much notice for the fact that it’s actually profitable as it does for being more or less entertaining.

This year Felicia and her team unleashed Geek & Sundry, a YouTube channel that takes the gamer-centric themes of The Guild to a whole new level. Geek & Sundry caters to the crossover demographic of computer and console gamers, and that elusive creature, the Table Top gamer. (Table top gaming, for those who didn’t grow up playing Dungeons & Dragons, is basically this: sit down to a round of Monopoly with some friends—hence the term table-top. Now add a wildly complicated 100 page rule book, play dress up, and join an improv group; all at the same time.  It is, in essence, your favorite board game, on steroids.)

Both Nerdist and Geek & Sundry have adapted a weekly schedule where the aim is to release something new each day, with different shows slotted for each day of the week.  Keeping up with a schedule akin to the network big dogs is a daunting and demanding task for these little micro studios, and the content being offered shows the strains on their resources. In terms of production value and content quality, it’s all over the map.

While production value is almost nonexistent on web video across the board, one would have hoped that these ‘mostly famous’ show biz vets would have raised the bar a bit more than they have—which is, I would say, currently of the “slightly better than an SNL sketch with a green screen” variety.  In fairness, both channels have hired motion graphics guys with chops to give their productions some snappy title sequences. But when the videos begin, the quality drops faster than the ratings for Sh*t My Dad Says (hashtag: shows inspired by twitter accounts). 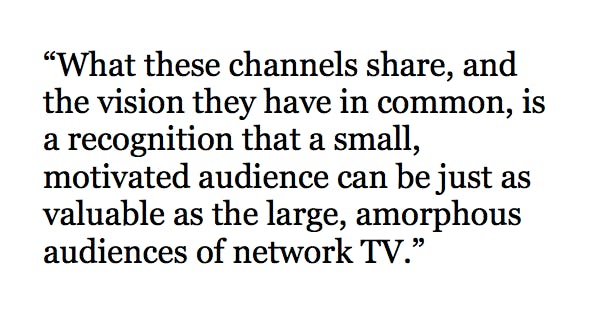 Chris and Felicia both appear on their channels in person on Mondays, to give the fans what they want—presumably since most people are coming to the channel because of the wit and performance of their creators. Chris offers a show where he goes bowling with real live famous people who, on the whole, drink too much and get loud and chatty. Entertaining? If you watch Bravo more than you admit to your friends, then probably, yes. Felicia, on the other hand, starts off the week with a to-the-camera show she calls The Flog. She discusses the week in nerd news, and usually attempts some sort of activity like giving CPR to a dummy, or baking something. Riveting? Probably not. But does this girl know who her audience is and precisely how to pander to them? Do Womp Rats hang around in Beggar’s Canyon? (That’s a yes.)  At one point she even admits on camera that she’s wearing a push-up bra to bolster her viewership. Look out Reply Girls, you’ve got company.

For the rest of the week, both Nerdist and Geek & Sundry are populated with a geeky variety of low-fi homegrown looking content that can mostly be described as “who the frack watches this stuff?!?”  And yes, as someone who curses in Battlestar Galactica terms, and circles the outer rings of geekdom, even I have no idea what they’re talking about most of the time. But I can tell you that what is offered from Tuesday to Friday on both of these channels  is pitch perfect: This is content catered to a microcosm of geek culture that is truly, extensively, uber-niche.

Take Nerdist’s “Fangoria’s Blood and Guts”, a show about folks who work behind the scenes in the horror film biz, hosted by Scott Ian, the guitar player from Anthrax. Yes really, that Anthrax. Geek & Sundry’s Thursday show, hosted by none other than geek hero and former “Star Trek” child star, Will Wheaton, is “On the Table”: Each week Will hosts a demonstration play of some insanely complex game. It’s like watching mold slowly grow on a forgotten sandwich deep in the furthest reaches of your refrigerator, made only slightly more tolerable by the fact that Wheaton is actually kind of charming, despite his constant use of nearly indecipherable Table Top jargon.

What these channels share, and the vision they have in common, is a recognition that a small, motivated audience can be just as valuable as the large, amorphous audiences of network TV. Inherent in this is an idea about where the internet is going. No longer just for funny cats and car crash vids, Internet video has evolved, and Hardwick & Day have not only recognized how fragmented audiences have become—they’re banking on it.

For years now we’ve been hearing about how our TV and our internet will someday merge. While that’s probably still years from reality, what these young YouTube Channels are showing us is probably closer to the truth. While broadcast and cable TV is still very much the drug of choice for the masses, truly original Internet programming is beginning to emerge—and more importantly, to succeed.

And what Internet programming offers us that primetime TV doesn’t is exactly where Hardwick and Day have made their stand: finding a small but dedicated niche audience who are willing & eager, loyal & engaged. If they can polish their offerings into something that really gives broadcast tv a run for it’s money, it won’t be long before the NBCs and ABCs of the world will be forced to take a real look. And attention has already been paid: Lorne Michaels, who launched Broadway Video’s “Above Average” YouTube channel this year (with varied results), and others like him, are dipping their feet in the YouTube pool.

In the meantime, I’ll be waiting for a niche YouTube channel that somehow combines my love of time travel, zombies, and sword fighting. The way things are going, I don’t think I’ll have to wait for long.