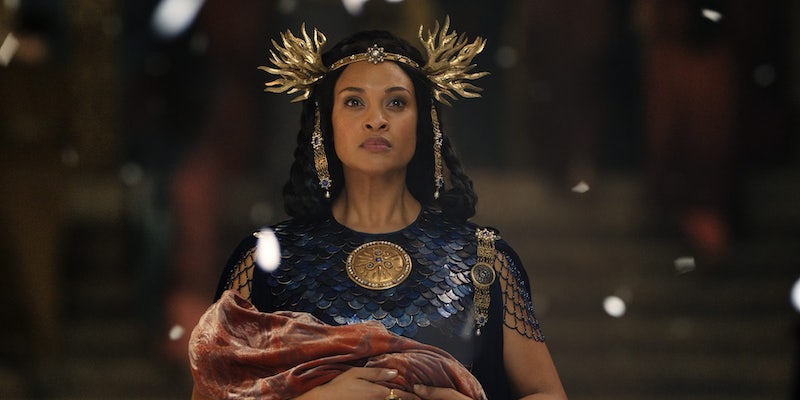 The show's deeper worldbuilding expanded this week, foreshadowing the future of Númenor.

This recap includes spoilers for The Rings of Power episode 4, “The Great Wave.”

Up until now, The Rings of Power has been relatively grounded, exploring character-focused arcs like Galadriel’s journey to Númenor and the everyday lives of the harfoots. Throughout all this, we’ve been aware that the times are changing in Middle-earth, signaled by ominous portents like the rise of the orcs and the arrival of The Stranger from the stars. But this idea truly took hold in episode 4, foreshadowing the kind of world-spanning doom that dominated the main Lord of the Rings narrative.

In the opening scenes, queen regent Míriel dreams of the fall of Númenor. A distant wind shakes the blossoms from Nimloth (a precursor to the White Tree of Gondor), followed by a massive tsunami that engulfs the entire city.

It’s a religious kind of apocalypse, likely more impactful for the Tolkien lore-heads in the audience. These fans already know about Númenor’s future—and perhaps more importantly, they’ll have an instinctive understanding of the mythology behind Númenor’s foundation and part-elven royal family.

Predictably for a show whose worldbuilding is sometimes incoherent or poorly expressed, The Rings of Power struggles to illustrate the cosmology of Middle-earth. It feels telling that when discussing Númenor’s relationship with the Valar (the gods), Míriel talks about faith and repentance—a contemporary Christian attitude that reflects the way Western SF/F writers often gravitate toward Christian philosophies.

While Tolkien himself was Catholic, seeding his work with plenty of Christian themes, he was also determined to present Middle-earth through the lens of myth and ancient history. There’s a lot of direct interaction between deities and mortals, and heavenly entities like the Valar are distinct characters with motives and conflicts of their own. This show takes place in an era where gods can physically reshape the world.

Míriel hints at this when she lets Galadriel use her family’s palantir, showing her the prophetic vision of Númenor being destroyed. They debate how Númenor can regain its “virtue” and avoid the wrath of the Valar, with Galadriel arguing that Númenor should reconnect with the elves. She’s soon proven right, because when she attempts to leave the city, Nimloth begins to shed its petals in protest. Míriel agrees to travel with her to Middle-earth, vowing to help defeat Sauron.

The fact that this massive geopolitical decision happens thanks to a dream and a symbolic tree is a wonderful piece of fantasy logic, but it’s rather poorly explained. Many viewers won’t know who the Valar are or why they’d care about Númenor. The city’s conflicts are primarily illustrated through the clumsy allegory of anti-elvish bigotry, rather than exploring the more mystical elements of Tolkien’s world.

Elsewhere, we see the more prosaic ways in which the world is changing. The orcs—led by their mysterious elvish leader Adar—are expanding across what will become Sauron’s kingdom. And in the Elrond/Durin subplot, we see the advent of an industrial revolution—a major thematic villain for Tolkien, who was all about idyllic rural nostalgia. Durin has discovered the existence of mithril, a rare metal that will eventually become renowned for its utility and beauty. (Tolkien, incidentally, was born in the mining region of South Africa, which may have influenced the dwarf mines in his writing.)

Durin initially tries to keep the mithril secret from Elrond, hinting at a One Ring-like obsession with the power and value of mithril. But after pressuring Elrond to take an oath of secrecy, he explains his discovery and gives Elrond a mithril ingot. This seems like a bad move because Elrond is in close contact with an elven smith. Celebrimbor will no doubt be fascinated if he accidentally stumbles upon a new precious metal. And if this secret gets out, it will spark a deadly feud between Elrond and Durin, who is short-tempered and unlikely to listen to reason.

While there’s plenty to discuss on a thematic level this week, I admit I’m finding The Rings of Power increasingly dull to actually watch. It shares a lot in common with Disney’s Star Wars shows, where paper-thin characters explain every plot point in explicitly obvious terms.

TRoP’s writers are enamored of a very straightforward kind of mystery box storytelling (“Who is Halbrand?” “What’s up with Theo’s sword?”) but otherwise, there’s very little dramatic tension. Halfway through the season, there’s been no attempt to build up the show’s main romantic pairing, Arondir and Bronwyn. And on a scene-by-scene basis, the story is painstakingly predictable and shallow. For instance, that scene where a Númenorean mob stirs up anti-elvish racism could easily be throwaway NPC content from one of the Witcher games.

Basically, most of this show’s strengths are either due to its budget, some strong performances from certain actors, or the lingering echoes of Tolkien’s source material. There’s no meat to the actual characters or story.