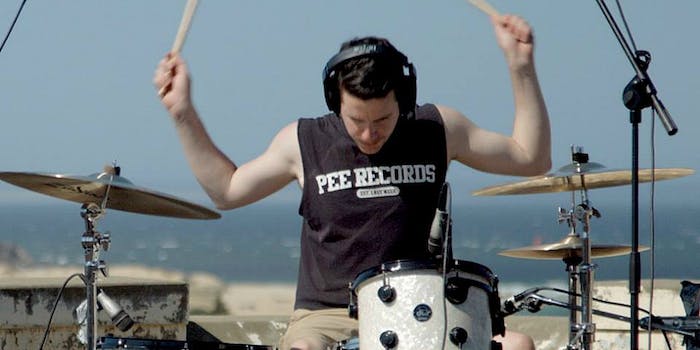 Kyle Smith plays effortlessly from 'Love Me Do' to 'Let It Be.'

Ringo Starr is a Beatle, a member of the most influential band in human history. But he’s also seen as a simple drummer, a man who kept time well and … that was kind of about it. But Starr’s legend as was the quartet’s goofiest (and luckiest) member has changed in the last several years.

“He was the guy the Beatles always wanted,” author Mark Lewisohn told the BBC in 2014. “He was everything [the band’s original drummer] Pete Best wasn’t … He was rock steady, he could play all the styles…. [His style] was sympathetic to everything they did … It brought an extra element to their songs that was in complete tune with what they were thinking.”

Starr, as this storyline gains traction, is finally getting the respect he deserves, and to help burnish his reputation, a drummer named Kye Smith paid the Beatle homage by covering 71 Beatles songs in a little more than five minutes, running the gamut from the band’s British Invasion era all the way through “Hey Jude.”

Smith ably showcases Starr’s ability to play all sorts of rhythms. Even Keith Richards, who was unimpressed with the songs from Sgt. Pepper’s Lonely Hearts Club Band, would have to give both men their due.

Awesome covers, especially the interpretation of “Yesterday” at the 1:33 mark. The only missing element was Starr’s joyous head rolling.

The genesis of Smith’s idea came, basically, at the beginning of his life, as he explained on Facebook.

And if you still don’t believe in Starr’s importance, here’s more from the BBC:

Starr’s work on the Beatles recordings is astonishing, even if it didn’t jump out in the way the drumming of other ‘60s icons did … Ringo almost never gets name-checked as an innovator, in part because he didn’t play solos … But consider how he makes the complicated shifts in métier sound effortless on Here Comes the Sun, the rolling, proto-metal tom-tom groove of Rain, the tribal dance thump of Tomorrow Never Knows, the hi-hat work on Come Together, the syncopated propulsion of Ticket to Ride.

Starr gave each song exactly what it needed, but he didn’t call attention to himself while doing it …

“He is nowhere near as flashy as so many drummers, but that isn’t what the musicians wanted,” Lewisohn told me. “He brought his personality to the kit, but he wasn’t flash. The Beatles recorded 215 tracks (between 1962 and 1970) in all these different styles … and how many tracks have bad drumming? The answer is zero.”

We salute you, Ringo.