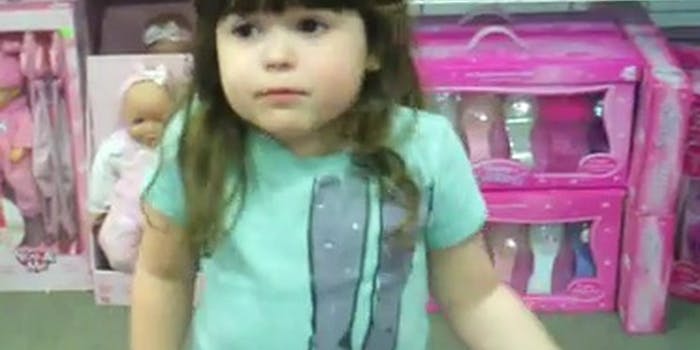 Riley has a few things for toy marketers to hear. And the Internet is listening.

Society says girls like princesses and boys like superheroes. One little girl named Riley thinks this gender construction is biased, and said so on a video filmed while she was standing in the toy aisle of a store.

The Internet apparently agrees with her, sharing her video all over the place and discussing marketing and gender constructs in its wake.

“Why do all the girls have to buy princesses” she says, slamming her hand down on a large girl’s toy, before wondering why toy makers are trying to “trick girls into buying the pink stuff instead of stuff that boys want to buy.”

Uploaded onto YouTube in early May, Riley’s rant sat dormant until the video was discovered by Reddit on Christmas Eve, where views shot up from a couple hundred to multiple thousands.

Shortly thereafter, the video was featured on outlets like Buzzfeed, the Huffington Post, and the Daily What, with frozen YouTube viewing data indicating the video has currently been viewed close to 800,000 times. Jezebel, the feminist-leaning pop-culture blog, gushed about the video, calling Riley’s observations “completely reasonable and insightful.”

Indeed, the majority of the Internet is now in love with little Riley. On Reddit, the thread featuring her video gathered over 500 comments, while on YouTube, the video has collected 1,300 comments—almost all of which are positive and supportive. Women especially, have taken to leaving Riley (and her father) encouraging mini-letters in the YouTube comments section.


“Dear﻿ awesomely socially aware child, as a girl who grew up on both Hot Wheels and Barbies, I think you’re awesome for realizing how much companies try to reinforce gender binaries through their toy marketing methods. I hope these ideas stay with you as you grow up and that you help make this world more open-minded. Rock on. Sincerely, A girl who likes superheroes :)” wrote Lupa1410,  in a comment that received 142 likes on YouTube.

“Dear Riley, You are brilliant. Thanks for asking the tough questions already. And you’ve got a pretty great dad it sounds like, so thanks to him too, for encouraging you to keep asking! I hope to see you in my classroom in about 15 years. I cant wait to hear what you’ll be asking by then! Sincerely, Another girl who got frustrated with the﻿ limited princess options a long time ago,” commented 504NOLAura in another top comment.