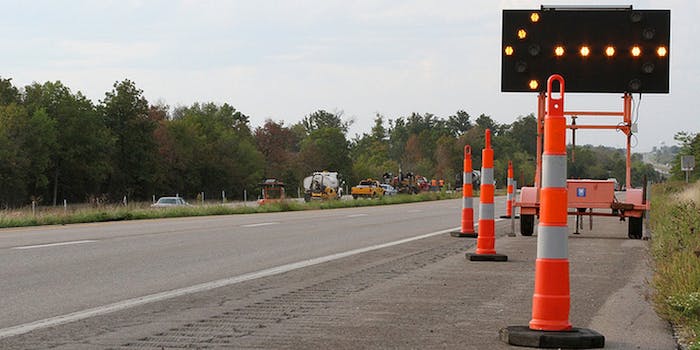 An Internet meme continues to become the worst urban legend ever. And this time, it’s hit Florida.

Last week, a lane closure sign in Ruskin, Fla., allegedly read, “Fuck her right in the pussy.” This piece of advice was recently given in a drunken World Cup interview, and has been mimicked in other on-air situations. It apparently stemmed from the world’s dumbest reporter, and the Internet just won’t let it die.

Sarah Carpenter spotted the sign as she was driving with two young children, and had to pull over to make sure the sign was real, ABC Action News reports. A spokesperson from Acme Barricades, which provided the sign, said vandalism has been an issue with their signs before, and blamed—drumroll, please—hackers for the obscene message.

The password has since been changed, but in the comments of the YouTube clip, people are talking about the “FHRITP movement.” Please, no. Just let it go.

Photo via KOMUnews/Flickr (CC BY 2.0)