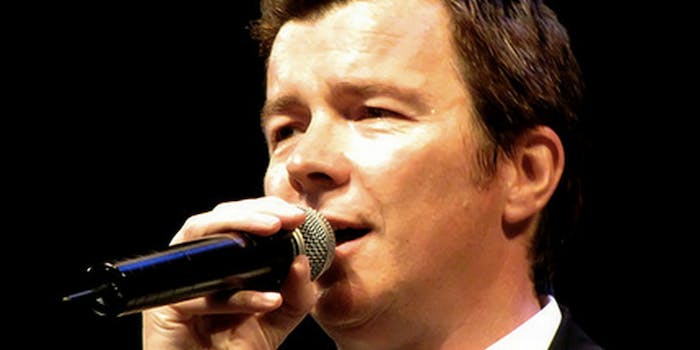 If only this story could link to Rick Astley’s 1987 music video instead of the actual news: AVG Technologies hit YouTube with a DMCA notice.

It was one of the Internet’s most popular memes. But as of Wednesday, the Rickroll is no more.

Rickrolling is the practice of promising a victim one link but directing them instead to Rick Astley’s 1987 music video, “Never Gonna Give You Up,” instead. It’s a bait-and-switch that has been embraced by everyone from the New York Mets to the White House.

However, the collective joke ground to a halt when AVG Technologies took the original video down from YouTube with a copyright complaint,  TorrentFreak reported.

“Taking down a five-year-old video with tens of millions of views is strange enough, but it is far from clear why AVG Technologies—the people behind AVG Anti-Virus—would want to do so at all,” enigmax wrote.

For its own part, YouTube has shown tacit approval of the music video in the past. On April Fools’ Day in 2008, it rickrolled viewers by redirecting every video on the front page to Astley’s video. However, the network is required to comply with copyright complaints.

Still, it’s hard to imagine how an ’80s music video would infringe on an anti-virus software. We’ll be following the story to see if it turns out to be a legitimate complaint or perhapsthe build up to the ultimate Rickroll.

Update: Thousands of Internet jokes have been restored! After a 24-hour takedown, “RickRoll’d” is available once more on YouTube. The Daily Dot is seeking comment.