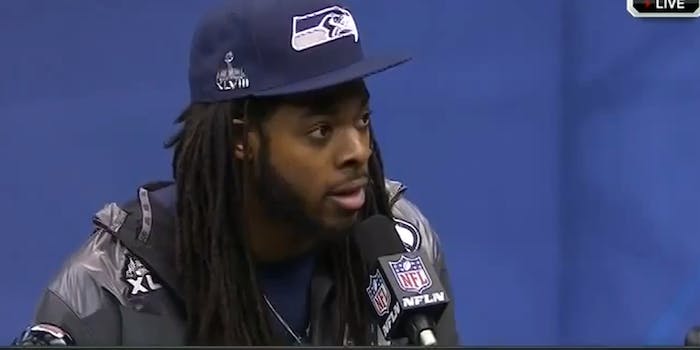 Everyone has been paying attention to Sherman after his candid interview with FOX Sports’ Erin Andrews went viral, so it was no surprise that he was one of the more popular players at the press conference. But one reporter skipped the football talk to ask him about how we should keep women from becoming strippers.

Sherman, who was both praised and criticized for his interview and follow-up Sports Illustrated editorial, managed to handle the question like a pro—or at least as much as he could with the question at hand.

“Well, I’ve never gone into a strip club and thrown money, so I couldn’t tell you,” he answered.

“I guess trying to understand that there are other avenues, there are other ways you can make money, that women can do anything they want in this world. You can go out there and be a CEO of a company. Like I said before, the same can be said for kids in the inner city—the ceiling is limitless and don’t limit yourself to those possibilities and those circumstances.”

The day was full of other odd inquiries from reporters. We now know that Sherman has a crush on Beyoncé just like the rest of us. At least he was spared from the worst question of the day. That honor was reserved for a player on the Denver Broncos.

Some guy at media day just asked Shaun Phillips if he considers this a must-win game. Check, please.