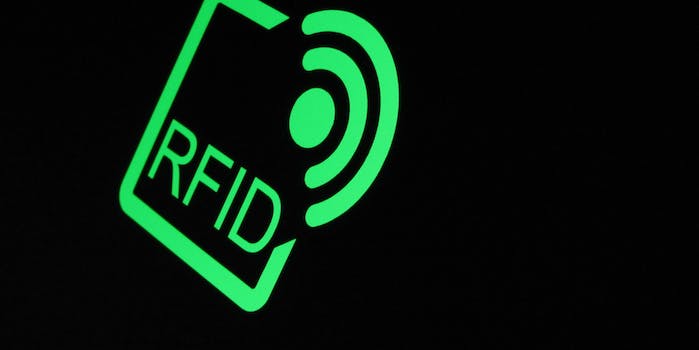 How the fall of RFID chips explains our current surveillance state

Who's really to blame?

Government treatment of individual civil liberties is no better than that of farm animals, National Security Agency whistleblower Edward Snowden claims in an excerpt from an upcoming book.

“By preying on the modern necessity to stay connected,” writes Snowden in his foreword to The Assassination Complex: Inside The Government’s Secret Drone Warfare Program, “governments can reduce our dignity to something like that of tagged animals, the primary difference being that we paid for the tags and they’re in our pockets.”

Snowden is, of course, referring to smartphones. The GPS in most smartphones can—and frequently does—work much like the tags used by farmers and referenced by Snowden. Tracking our every move with increasingly worrisome accuracy, smartphones provide marketers and authorities with information about where we eat, shop, work, live, and sleep.

Not that long ago, the specter of government surveillance wasn’t a smartphone but a network of tiny chips implanted on your car, in your wallet, or even in your body. Once the topic of a heated debate, RFID chips now seem like modest and quaint anachronisms compared to what a smartphone can learn about you. The rise and fall of concern over these tiny chips tells the story of our sudden and complete acceptance of the surveillance state.

RFID tags are astoundingly useful in a number of ways. Household pets are frequently “chipped” so they can found and identified if separated from their home (raising the rate at which they are located by 238 percent for dogs and 2,000 percent for cats, according to the Humane Society). Warehouses and shipping centers use them to improve logistics and decrease wait times. Organizers of marathons and other races use them to get the most accurate finish time (check for one in your number tag from your latest 5k). Delta Airlines even unveiled RFID luggage tags earlier this week with the hope of helping passengers recover lost luggage.

The rise and fall of concern over these tiny chips tells the story of our sudden and complete acceptance of the surveillance state.

Marketers have also found their appeal. Stores like Walgreens have been using RFID chips for years to more closely track customer movements and better target in-store displays. Festival goers at Lollapalooza have, since 2014, been asked to use RFID-enabled bracelets to charge all purchases instead of bringing cash into the festival. In 2013, Budweiser unveiled “The Buddy Cup,” a red beer cup linked to your Facebook account that will friend you with any person with whom you share a toast.

Once upon a time, however, these microchips were not viewed as harmless features of efficiency and innovation. The concept of being forced to carry a RFID-enabled device—or even having one under your skin—was once isolated to dystopian science fiction. Neo is tagged by Agents in The Matrix, as is Arnold Schwarzenegger’s character in Total Recall, and all tributes in The Hunger Games.

Such depictions came closer to reality a decade ago when RFID use by employees first came under public scrutiny. In 2007, Citywatcher.com, a manufacturer of surveillance hardware, raised eyebrows when two of its employees had RFID chips implanted into their skin to be used as keys for access to top secret information. As USA Today predicted microchipping “might start with Alzheimer’s patients or Army Rangers, but would eventually be suggested for convicts, then parolees, then sex offenders, then illegal aliens — until one day, a majority of Americans, falling into one category or another, would find themselves electronically tagged.” A 2007 NBC Nightly News report suggested RFID implants would be commonplace by 2017.

The issue became a minor controversy for an even more minor presidential candidate. Tommy Thompson, who ran for the GOP nomination in 2008 and the Senate in 2011, once sat on the board of Verichip, a major manufacturer of RFID chips. “You put it in your right arm and it is very small and it doesn’t bother you at all,” Thompson told CNBC. “But it certainly is going to allow you to identify who you are, protect your child if you have a new child that’s born in a nursery, you can protect that child from having somebody walk off with it.” Thompson said he would even get one installed himself and declared RFID chips “a big coming thing.”

Many evangelical Christian groups even worried the coming ubiquity of so-called “spychips” would bring about the end of the world forecast in the Book of Revelations. According to the Christian Broadcasting Network, the use of RFID or NFC chips installed under the skin as payment is fulfillment of Revelations’ prediction all humans will one day be forced to wear the “mark of the beast” on their hand or forehead. Some depictions, such as that in the best-selling Left Behind series of speculative apocalyptic fiction, show microchips used as currency in an Antichrist-controlled world government.

The idea of tagging humans against their will isn’t that far-fetched. In 2010, an RFID-manufacturer attracted the attention of law enforcement when it failed to get informed consent before implanting microchips into 200 Alzheimer’s patients. In 2015, Manhattan surveillance firm BrickHouse Security reported getting several calls a day from concerned parents asking if they could install microchips in their child in order to prevent kidnappings. After the disappearance and death of Avonte Oquendo, a 14-year-old New Yorker with autism, Sen. Chuck Schumer proposed “Avonte’s Law,” which would provide funding for law enforcement, families, and caretakers to, among other things, install tracking devices on the clothing of or directly on their autistic children.

The supposed need to implant computer chips under the skin of sensitive populations has been almost completely replaced by the surveillance capabilities of the smartphone you likely already own. Marketers use smartphones to track your every move on- and offline, including your in-store movements. Employers have found a wellspring of available data not just in apps used by employees but by charting their movements through the use of “wellness” programs that encourage and even reward employees for using wearable devices such as a Fitbit. A 2015 report from data analytics firm Tractica expects wearable use among employers to grow exponentially before 2020, with an annual growth rate of enterprise purchases of such systems growing 108 percent each year.

The idea that you’re being spied on isn’t news. Our relationship with this Orwellian state of affairs is more one of complacency than acceptance. According to the 2016 Consumer Openness Index, released last month by Open XChange, consumers in the U.S., U.K., and Germany are concerned about their privacy, but they’re not changing their digital habits to protect it. Similarly,  a 2015 study by the Pew Research Center found 93 percent of Americans felt very strongly about protecting their privacy in their everyday life, yet 51 percent reported feeling they had very little control or none at all over how and when their information is collected.

As Snowden points out, “the modern necessity to stay connected” is enabling governments and corporations to monitor citizens on a level once thought incomprehensible. The concept of having a microchip installed in our bodies to do all this spying is creepy, and rightfully so. Even today, you can turn off your smartphone and go “off the grid” if you so choose. But doing so increasingly requires a larger sacrifice than the average person can make.

It doesn’t really make a difference if the chips are outside of our body or under our skin if we become completely inseparable from them.