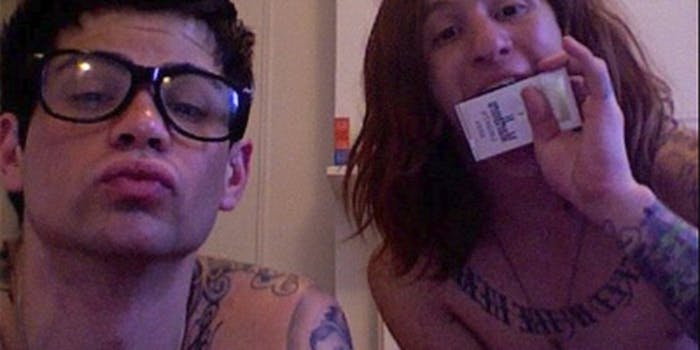 If you have nude pictures of yourself, there’s a chance they’re going to end up on the Internet—especially if they’re in electronic form.

Hunter Moore, the site’s creator, has no problem featuring the nude photos, because he reasons, he himself is very public with his private parts.

Isanyoneup.com has a removal request form people who are featured on the site can use.  Moore told Hill he honors those requests, saying “I’m not crazy; I’m not evil.”

But in the months since the July Hill interview, Moore seems to have changed his tune.

In fact, Moore told the Awl in a story published yesterday, that people who have electronic pictures of themselves in compromising positions, basically deserve what they get.
“It comes down to, you’re fucking stupid and I’m making money off your mistakes … It’s like you’re playing Russian Roulette like, oh, let’s hope this doesn’t get out.” Moore told The Awl.

The Awl piece highlights Moore messing with people who want their photos removed by publicly posting their messages meant for his eyes online and sometimes including their private information.

“People threaten me with lawsuits every day, which is funny, because it fuels the site,” Moore told The Awl. “They send me all this crazy stuff, but at the same time they’re just building content for my site, which just makes me more popular.”

The site technically isn’t illegal, because users submit the content, which means the user owns the copyright for the material, not Moore. In an interesting twist, the users who submit the photos are anonymous. Just the photo subjects are public.

Moore claims isanyoneup.com gets 30 million pageviews a month from 100,000 visitors a day, a figure that is hard to verify when comparing traffic stats on Compete, Alexa, and Quantcast. (Compete’s data verifies Moore’s claim, but Quantcast clocks 15,000 people from the US visiting a month.)

But, as Moore would say, he doesn’t “give a fuck.”

Moore was not available for comment at time of publication.