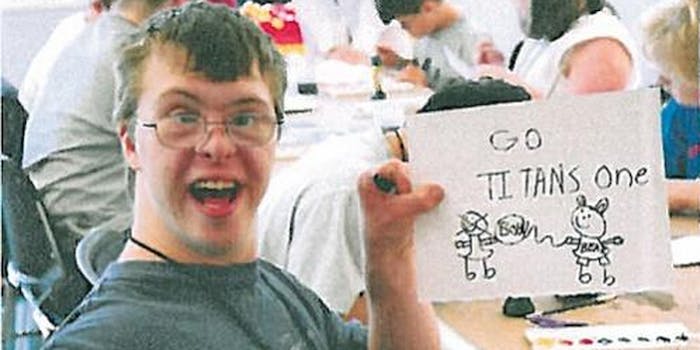 Internet and meme culture are putting more and more pressure on the issue of defamation online.

Memes seem fairly innocuous. Some, like Scumbag Steve, embrace their Internet fame, and a few have even managed to eke out a living as minor celebrities. The consensus seems to be that this form of viral comedy is basically harmless.

That’s not the way one Tennessee family feels. The parents of Adam Holland recently filed suit on behalf of their son, alleging defamation of character after a 10-year-old photo of Holland was turned into an Internet meme mocking his Down syndrome. Though the case will be hard to prove, a court victory for the Holland family could have a significant impact on Internet culture.

According to The City Paper of Nashville, Pamela and Bernard Holland have filed suit against a Tampa, Fla., radio station, a Minnesota resident, and a meme generator website, requesting $18 million in damages. The defendants are accused of repurposing a photo of Adam Holland taken in 2004.

The photo shows the then-17-year-old proudly holding up an art project he made as part of a special education class. Though the original drawing says “Go Titans,” in reference to the local NFL team, the meme has replaced the original art project with countless other—often derogatory—messages.

Such was the case with WHPT-FM, the Tampa radio station that doctored the sign to read “Retarded News” and used it on the company website to link to a category of silly and ridiculous news items. They were named in the lawsuit along with signgenerator.org, which featured Holland’s photo as part of a “Retarded Handicap Generator.” The website invited users to create their own text to replace Adam Holland’s original artwork.

The lawsuit also names Russell LaLevee, of Spring Park, Minn., who posted the picture on Flickr with a “sexual reference.” LaLevee, a Minneapolis area realtor, has since taken down the photo but not before it garnered more than 31,000 views.

None of the defendants named in the lawsuit immediately responded to the Daily Dot’s request for comment. In a statement to the Associated Press, Cox Media Group, which owns WHPT, said it was their policy not to comment on ongoing litigation.

“What was done here was done maliciously, at least on the part of some of those defendants, ascribing and using expletives and derogatory statements that degrade and dehumanize this young man,” said Larry Crain, the Hollands’ attorney, speaking to a local news affiliate.

The suit alleges that the defendants violated the Tennessee Personal Rights Act while misappropriating Adam Holland in a false and defamatory manner that intentionally inflicted emotional distress.

While many would agree that turning a young man born with Down syndrome into meme is tasteless and mean, it will be hard to prove civil liability.

Woodrow Hartzog, an assistant professor of law at Samford University with a specialty in privacy law and online communication, said defamation cases have always been notoriously tough to prove, due to the ample “breathing room” courts have given the First Amendment over the years.

“Because free speech is such an important right in this country, the courts have a long tradition of leaning on the side of the first amendment,” he told the Daily Dot. “That’s why we have comparatively fewer lawsuits that are actually brought before the court.

“Defamation exists everywhere on the Internet, but most people can’t be bothered with the cost, in time and money, to prove wrongdoing.”

But the Internet and meme culture are putting more and more pressure on the issue. Last May, a mother lashed out online after a three-year-old photo of her daughter, who also had Down syndrome, became the I Can Count to Potato meme.

In theory, the laws regarding defamation and libel apply the same universally. In other words, posting a false claim in an Internet comment is just as libelous as writing it in a letter to the editor that appears in a print newspaper. Judicial precedent also makes it clear that reprinting a libelous statement is its own act of libel, even if the person reprinting did not actually create the original false statement or image.

But in an age when virtually anyone can be a “publisher,” this traditional definition is being pushed to the edge. The speed and carelessness with which content can spread far exceeds what traditional media was ever capable of, to the point where trying to undo a meme, Hartzog said, is like “trying to put toothpaste back in the tube.” He said the casual pervasiveness of memes is creating a culturally lax attitude toward these issues.

At the same time, there have been virtually no new legal precedents established specifically to protect people from Internet-specific defamation, Hartzog said. There have been legislative efforts to control Internet civility and curb cyberbullying, but he said many of these have been difficult to enforce. Throughout American legal history, defamation has typically been a matter of common law and Hartzog predicts any changes will have to come from the bench as byproducts of lawsuits like the one filed by the Hollands

“One of the frustrating things about Internet communications is that people who have been wronged or defamed don’t really have a good answer right now in the law,” he said.

“The legal tools available to these victims aren’t very effective. It’s a good thing from a free speech standpoint; it ensures a healthy amount of free expression on the web. But it’s bad because we have these torts that are intended to protect people and they’re sort of useless in the Internet age.”