Someone wrote ‘LOL’ on a bill instead of leaving a tip

Seriously, there's nothing funny about this.

There’s a fine line between man and monster, but one New Jersey restaurant patron found it surprisingly easy to cross that line.

Jess Jones, a 20-year-old server at D’Jais Bar and Grill in Belmar, New Jersey, was on the receiving end of this man-turned-monster’s wrath. She rang up a $112 bill for his party of eight, but he welched on the tip, writing “LOL” instead of a dollar amount on the tip line.

Jones snapped a photo of the non-tip, obscuring the name of the offender, and sent it to a local newspaper. The monstrous customer even had the gall to write “1 hour for food” next to his insulting anti-gratuity. 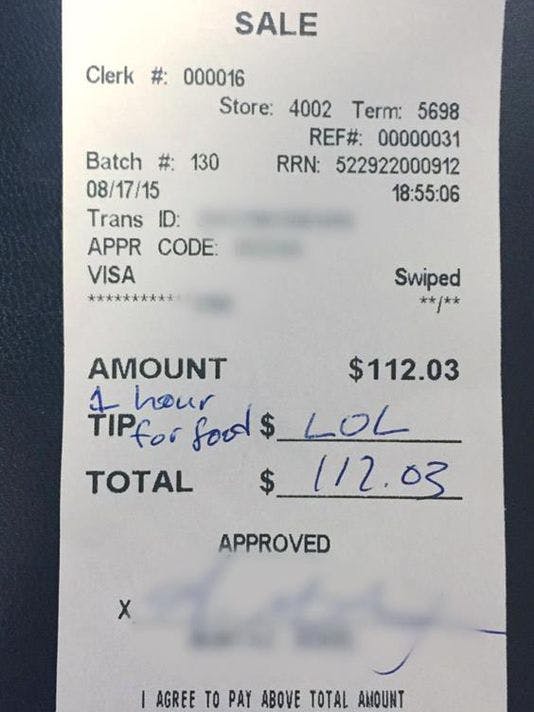 Ignoring the fact that New Jersey servers make $2.50 per hour and they rarely have anything to do with the time it takes to prepare food, what kind of person thinks it’s okay to write “LOL” on a check? A more appropriate insult would have been to write “haha” instead. Everyone knows that LOL is well on its way out.

Given how passé the word is, this villainous patron is really more of a Grendel than a Voldemort. It takes a monster from the days of yore to dig into a bag of insults that everyone knows are part of a dead language.