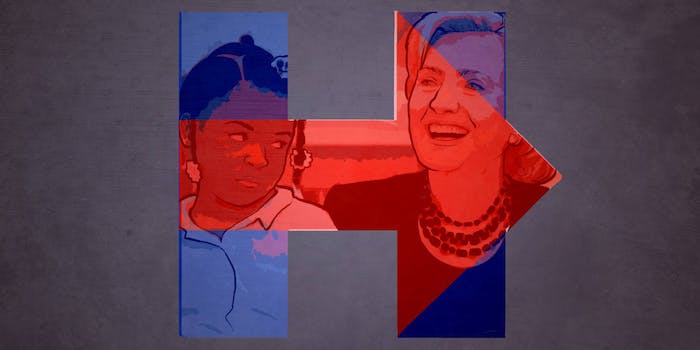 #GirlIGuessImWithHer is the perfect hashtag for every resentful Clinton supporter

This the passive-aggressive hashtag we’ve all been waiting for

For every disappointed voter who isn’t a huge fan of Hillary Clinton but really despises Donald Trump, #GirlIGuessImWithHer is the hashtag you’ve been waiting for.

The hashtag, which plays off of Clinton’s campaign slogan #ImWithHer, was started by Twitter user @MADBLACKTHOT who posted the tweet, “For every1 who despises Trump but isn’t sold on Hillary, this is 4 u.” The user reports selling t-shirts with this slogan, for those who ‘support’ the cause.

Clinton became the presumptive Democratic presidential nominee on Tuesday. While some—including President Barack Obama who recently endorsed Clinton—were happy about the news of Clinton’s win, others weren’t as trusting.

#GirlIGuessImWithHer quickly became a viral hit as it reflects the feelings of voters who would rather vote for Clinton over Trump. Twitter users quickly chimed in tweeting various GIFS and photos showing their begrudging allegiance.

When I don't see Bernie on the ballot in November #GirlIGuessImWithHer pic.twitter.com/ylSN34wavv

Me being led to the polls in November #GirlIGuessImWithHer pic.twitter.com/wPPjNj0SaU

#GirlIGuessImWithHer
Me and the rest of the Bernie supporters headed to the polls in November like … pic.twitter.com/C0Q4ORZ0zx

If you think I'm going to choose between the better evil, Hilary ain't any better. #GirlIGuessImWithHer pic.twitter.com/hXjNwehamp

While newfound Clinton supports may not be completely sold, recent polls say that 80 percent of Bernie Sanders‘s supporters are expected to vote for her in the upcoming election. This may come as a blow to a Trump spokesperson who said Thursday the campaign expects up to half of Sanders’s fans to support the Republican nominee.