Don't worry: He's OK, and taking it in stride.

Live television is always unpredictable. A reporter during a live segment might face a flash storm, or an angry pedestrian, or even a background drug deal. Even so, few reporters outside of war zones expect to suffer head trauma during their segments, especially head trauma from a flying skateboard.

If you’re doing a live report from a skate park, you might want to wear a helmet or stand back, lest you suffer the fate of Australian TV reporter Mike Amor.

Amor, the U.S. bureau chief for Australia’s 7News, was in the middle of a sentence, telling viewers, “You’d be right to be skeptical—thousands of traditional skateboards…” when a skateboarder lost control of his board and the object went flying across the skate park. You can hear the group of onlookers behind Amor shout “Whoa, whoa, heads up!” as the board sails toward the back of his head. 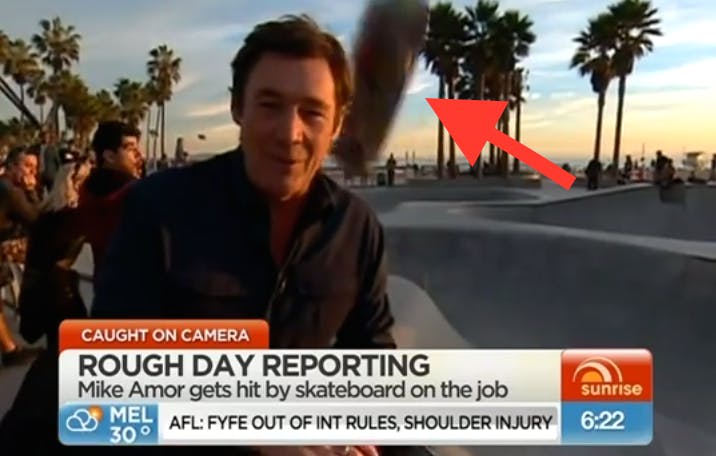 For the record, Amor is fine. He’s even relishing his moment in the global media spotlight:

During a replay of the clip of 7News’s “Sunrise on 7” program, one of the anchors posed the only question left unanswered: “What happened to the kid?”