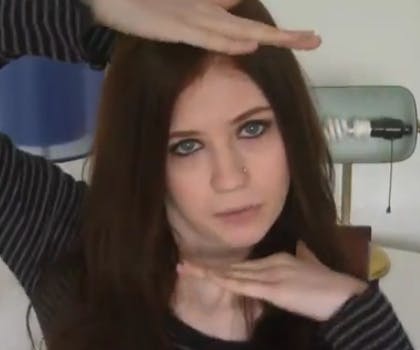 Those bosomy, content-free responses to popular videos? All a big prank, says one prominent reply girl. She's not the only one quitting the spammy genre.

It’s the end of Tittiepocalypse as we know it. Just last week, YouTube’s reply girls seemed like a tidal wave of id-threatening bosoms responding brainlessly on camera to what seemed like every popular video on the site. Now they’re hanging up their push-up bras one by one.

Was it all some big game—or, as they say on the Internet, a troll?

MeganSpeaks, aka Megan Lee Heart, joined the handful of other reply girls in bringing her channel to a close, with a farewell video titled “The End of Pointless Reviews.”

In the seven-minute vlog, uploaded yesterday, Heart explains when she first started doing reviews, she didn’t focus the camera on her breasts because she wanted the videos to be “about the shit coming out of my mouth.”

Once she discovered thereplygirl, the first reply girl to create a channel dedicated to systematically replying to as many trending videos as possible, Heart says she created her Pointless Reviews channel not to attract views but to mock thereplygirl.

Heart ends up calling the resulting controversy a “Megan Lee Heart soap opera,” and  says she doesn’t regret anything.

“Now that I think about it, Pointless Reviews is kind of trolling,” exclaims Heart near the end of her video. (The Daily Dot asked Heart for comment, but through someone who identified himself or herself as her manager, she declined to speak.)

Alejandra Gaitan—thereplygirl on YouTube—appears to be the sole holdout in this controversy. She responded to Heart’s video yesterday. Gaitan addressed some of Heart’s accusations before asking Heart to “just stop saying things that are not true.”

Gawker profiled Gaitan today, highlighting her business smarts and ability to game YouTube’s related-videos system. Gaitan didn’t take the stance that she was playing some elaborate prank. Instead, she told Gawker reporter Max Read—via video—that she dressed the way she dressed because “sex appeal just works.”

“And denying the fact is just going against the basics of how we are all, how our brain works,” Gaitan said.

LauraSparkling, a YouTuber and reformed reply girl, might be the most sublime prankster of all.

In a video uploaded on March 3, the last upload on her reply-girl channel, Laura comments on the Tittiepocalypse drama via a Katy Perry parody. Lyrics like “YouTube turned me on, then shut me down,” “I’m not even going to stop for a death threat, no,” and “my boobies are a part of me” all seem too poignant to be accidental.

We end with this note: HappyCabbie, an outspoken critic of Megan Lee Heart, has posted a response to Heart’s move.

Just without the cleavage.