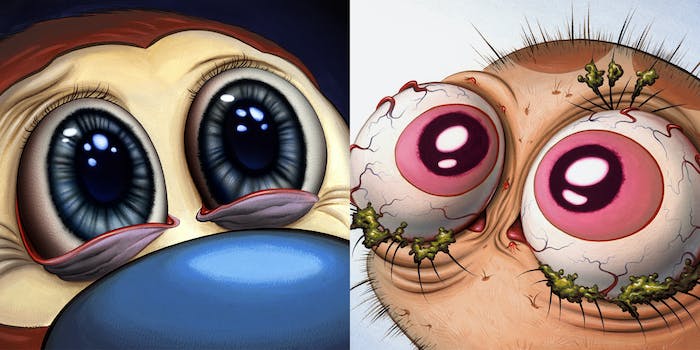 The original show was created by an alleged sexual predator.

The Ren & Stimpy Show is the latest 1990s cult cartoon to get a modern revival, following announcements for Daria, Clone High and Beavis and Butt-Head. But while Ren & Stimpy was influential and beloved in the nineties, it isn’t being welcomed back with open arms. The show’s creator John Kricfalusi was accused of preying on underage girls in 2018, and for many former fans, this casts a dark cloud over any attempt at a revival—even if Kricfalusi isn’t involved anymore.

Premiering on Nickelodeon in 1991, Ren & Stimpy was a revolutionary hit for adult-rated American animation, earning critical praise and plenty of controversy thanks to its blend of absurdist humor, violent slapstick and edgy shock-value content. According to a source in Variety, Kricfalusi “will have no creative input into and will receive no financial remuneration from” the new series airing on Comedy Central. It’s a necessary caveat for this revival to go ahead, but it also raises the question of why Ren & Stimpy needs to be brought back in the first place. People in the animation industry are already criticizing the move on social media, asking why Comedy Central is so keen to resuscitate an old show with toxic baggage. Why not greenlight something new by a marginalized creator, instead of returning to an old style of edgy comedy popularized by straight, white men—and in this particular instance, masterminded by an alleged sexual predator?

Just like with live-action media, there’s a Hollywood trend for rebooting well-known cartoons instead of promoting new material, especially if those older cartoons have some nostalgia value for millennial/gen-X audiences. In many cases, these shows are being revived because TV networks see them as an easily marketable brand, not because there’s any particular outcry for new episodes. Beavis and Butt-Head is an obvious example, while Ren & Stimpy is actively controversial. A new showrunner can’t erase the fact that Ren & Stimpy was created by an alleged pedophile, putting a new spin on his image as a boundary-pushing rebel.

The idea of a new showrunner is a whole problem in itself. Whoever replaces Kricfalusi will essentially be tasked with damage control. And in these cases, there’s often pressure to hire women and other marginalized individuals to clean up the mess of a problematic white man. Hiring a diverse creative team is an obvious way to bring Ren & Stimpy to a 21st-century audience… but they will still be working on Ren & Stimpy. This dilemma highlights the way TV execs prioritize old titles over new ideas and creators.

Like most corners of the entertainment industry, adult animation is dominated by white men. At the moment, Tuca & Bertie and Bless the Harts are the only examples with female creators and showrunners, and Lazor Wulf (an experimental late-night Adult Swim cartoon) is the only adult series we could find with a Black creator. This is in a crowded field led by high-profile titles like Bojack Horseman, Bob’s Burgers, American Dad, Family Guy, South Park, and Rick & Morty. A lot of these shows share a similar vibe that unavoidably draws from the tastes and experiences of their white male creators, illustrating why the industry needs to uplift a more diverse pool of creative talent. That’s not the same thing as reviving Ren & Stimpy with a new showrunner in charge.