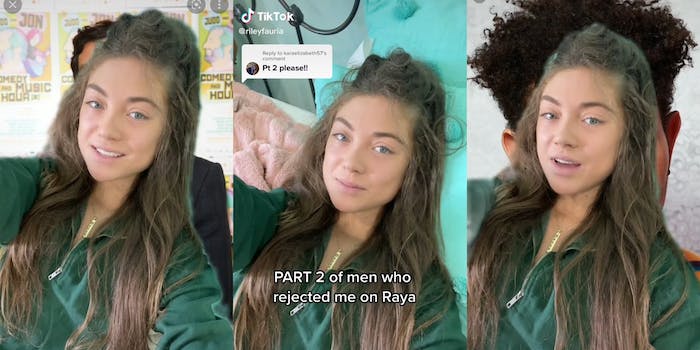 ‘If you want your self-esteem to drop, Raya is the app for you’ : TikToker shares all the celebrity men who rejected her on Raya

'Starting off strong, we have the guy from The Office.'

In a series of viral videos, TikToker Riley Fauria (@rileyfauria) shared all of the celebrity men who she says have rejected her on the exclusive dating app Raya.

Part one of the series has over 1 million views as Fauria goes on to name actors David Spade, Chris Rock, Ethan Cutkosky, and Drew Starkey as a few of the men she tried to match with.

Raya is a private, member-based app with options for networking and connecting with people worldwide. However, most celebrities, influencers, athletes, and models utilize the app as a dating service. Users interested in joining must apply first and wait to be accepted. In one of her videos, Fauria claims a recommendation may help you get approved.

In the comments section, users shared similar experiences and asked questions about the app.

“How do you know if they are real, not fake?” one user asked. Fauria responded, revealing that there is a verification process.

“Idk why I just feel like everyone has a shot with David Spade,” another commented.

“Starting off strong, we have the guy from The Office,” she says.

“I think I should probably stop doing these,” she says at the end of the video. “I’m really, really breaking open some old wounds right now.”

In the comments section, users discuss the inner workings of Raya.

“Does the app tell you who rejected you? Or how do you know they said no?” one user asked.

“If you swipe yes on them and don’t match, it’s because they swiped no haha,” another user answered.

In a separate TikTok in the series, Fauria warned users of joining Raya as you are competing with “Instagram models, real-life models, influencers, CEOs, and millionaires.”

“If you want your self-esteem to drop immensely, Raya is the app for you,” she says.

In the fourth and final part of the series, Fauria revealed the last few names of celebrity men who have rejected her: Aaron Maternowski (known as @curlyfuq), one of the brothers from the 2007 Nickelodeon television series Naked Brothers Band, and Zane Hijazi.

In regards to her matches, Fauria answered as to why she will not list any names.

“I don’t wanna ‘expose’ anyone I’ve talked to/matched with on there!!” she wrote in a comment. “I’m only doing these people because I’ve never talked to them so I feel like it’s not ‘exposing’ anything.”