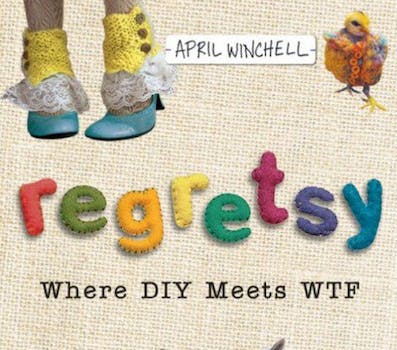 Regretsy, the blog that made its name by mocking the most ridiculous creations on crafingt site Etsy, is closing up shop after running out of crafting jokes.

Regretsy, the popular site that lovingly (but snarkily) poked fun at some of the less than stellar arts and crafts products sold on Etsy, is closing for business.

The sad news was delivered by site founder April Winchell—known online as “Helen Killer”—in a personal blog post aptly titled “Let’s wrap this up.” In her farewell address, Winchell recounts how she watched her own father, a renowned voice actor and television host, fall into depression when he wasn’t working.

Winchell told herself that she would never fall in this pattern, that she would always “find ways to entertain people.” Regretsy was born from this self-made promise.

The site, first launched in October 2009, was an immediate hit. It was popular enough that Random House gave Winchell a book deal. Regretsy: Where DIY Meets WTF, took the site’s acerbic tone and format and put it into book form.

But Winchell’s site has been more than just an outlet for her need to entertain others. On more than one occasion Regretsy took large companies head on for their questionable practices.

The first to feel the wrath of Regretsy’s vocal community was PayPal, which in December 2011 shut down the craft comedy blog’s annual charity fundraiser over a misunderstanding concerning the pay button used. The latter company, owned by eBay, quickly reversed its decision, apologized, and even made a donation of its own after Regretsy fans took to Facebook and Twitter to lash out against PayPal.

The Regretsy community also threw their support behind an artist whose work was co-opted without consent by H&M. The clothing retailer apologized and promised to make amends, but after the furor initially died down, H&M walked away from its word. That led to a second wave of Regretsy anger. Eventually, the company made a $3,000 donation to an animal shelter on behalf of the artist, proving yet again that you don’t mess with cross crocheters.

The site has largely been a positive experience for Winchell, but she promised herself that she would walk way “when it stopped being fun.”

“Well, that day is here,” she writes. “Actually that day came and went quite a while ago, but the success of the site, the readership and the community have been very hard to give up. But now I really have no choice.”

Winchell, a voice actor much like her father, stated that she was walking away from the blog because of various projects in the works.

Above all, however, she felt like there were “no more jokes left to tell about crafting.”

“After three and a half years, I’ve said everything I have to say about it, and now we’re just Bedazzling a dead horse.”

The site won’t be disappearing completely. Beginning on Feb. 1, it will transition from a blog to an archive, with all the posts remaining. It will also still allow users to leave comments.

Most importantly, the site’s forums will also stay.

“There is a wonderful, supportive community there, and I want those people to remain there and enjoy it for as long as they care to,” Winchell wrote.