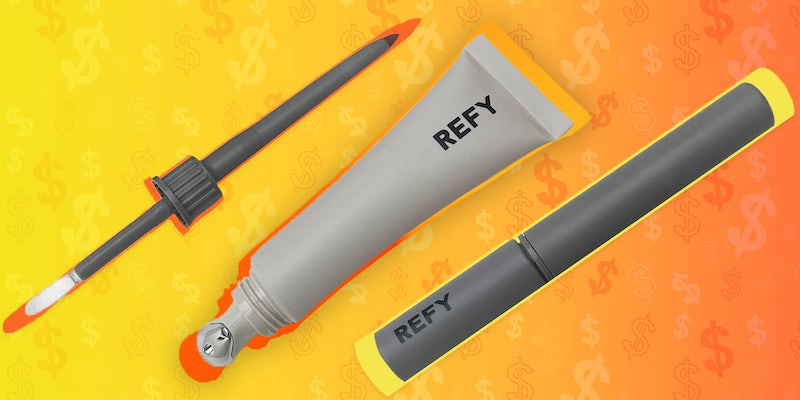 TikToker says her video was used in Refy Beauty ad without her permission, sparking debate

In a now-deleted viral TikTok, a creator said her video was screen recorded and used in another TikToker’s ad without her permission. She questioned whether it was legal, sparking debate over intellectual property rights. Passionfruit spoke with two law experts to explore social media copyright protections on TikTok.

The video by the creator, Princess Rogue (@princessrogue), was posted earlier in the month and deleted this week after receiving over 29,000 views. In the video, Rogue showed an ad from another creator, Nguyen (@nyeatsbrown), that uses her own video review of a lip kit by Refy Beauty. Rogue said that her video was without permission and that she wasn’t even tagged in it.

The ad, which is still up on Nguyen’s channel and has over 114,900 views, shows a screen recording of Rogue’s video about the Refy Beauty lip kit, that says: “If you only ever buy one thing that I suggest on my TikTok, please let it be this product.” In the video, Nguyen then tests the lip kit and gives it glowing reviews.

@nyeatsbrown I hate @refybeauty for making me addicted to this 😩 haven’t put it down!! #makeup #makeupreview #lipstick #refy10hourliptest ♬ original sound – NGUYEN

In the now-deleted response video to the ad, Rogue said she was confused by the use of her video in the ad.

“She used my TikTok as a way to segway into her TikTok, which would be fine—she didn’t stitch me though, she screen-recorded my TikTok and then kept going. … She made money off of my TikTok. Refy didn’t reach out to me. That TikTok went viral. That’s my TikTok about their lip product. They didn’t reach out to me and ask me to turn them into an ad, um, but she’s using my likeness in her ad without tagging me. … Is that legal? Will someone let me know? Lawyers of TikTok?”

A senior marketing manager with Refy Beauty told Passionfruit that Rogue has since been paid for her contributions to the ad.

“The creator actually removed that video and is working with us directly. I won’t comment on legalities as I am not well versed in law, however, an oversight occurred with the inclusion of her video which we’ve worked directly with both creators to rectify. Nguyen did not remove the video as we waited for all parties to feedback before taking any action, Rogue is on a different time zone to us which unfortunately lead to her second video as she waited for a response, but after working with both creators directly Rogue was happy for Nguyen’s video to remain live and has been compensated for usage,” the manager said.

Rogue did not respond to Passionfruit’s request for comment via email and TikTok comment in time for the publication of this article. In a response to Passionfruit via email, Nguyen also provided an update on the situation.

“[Refy has] paid the original creator for using her video in my AD, Rogue accepted & has made an agreement with the brand to take her video down criticising me. My video was sent in for approval, it got approved and I posted it. Therefore this isn’t my fault. I chose to leave it up because the original creator has been compensated and the problem has been dealt with. The article you’re planning to write is at a lost cause as there’s no longer evidence,” Nguyen said.

Prior to the video’s deletion, many viewers in the comments section of Rogue’s video expressed disapproval of the ad, and creators discussed whether there was a copyright issue at hand. Copyright is an intellectual property right that legally protects original works, like videos, by creators.

“The brand 100% should have not let that get approved. You definitely deserved to be compensated,” one user criticized.

“I’ve learned that some brands specify to not have anyone else in my content or if there is going to be someone else, they have to sign,” one creator shared.

“It may be legal because you’ve posted it on a public platform but the not tagging thing is odd,” another speculated.

Multiple users also came to Nguyen’s comments section, criticizing her for not crediting Rogue or taking her video down. Soon after Rogue’s video was posted, Nguyen tagged her in the comments section of her video.

“Babe I’m so sorry I had a deadline and tiktok doesn’t let you stitch the original video and then add a video edit on so I had no idea what to do as… this is my first paid ad with a beauty brand. I’ve seen so many videos with stitches at the beginning without mention so I thought it would be ok. Will tag you now xx,” Nguyen commented on Rogue’s video.

“She just tagged you an hour ago,” one user commented on Rogue’s video.

“I saw, an afterthought. I’ve made it clear that i do not consent to being in her ad. The right thing to do would be to take it down,” Rogue responded in the comments section. “I’m not trying to have anyone hate on this creator BTW but she should’ve known better and STILL has the video up. Just take it down or delete my part.”

Rogue also commented on Nguyen’s ad, saying: “As a fellow content creator I would never use another persons content without tagging them or giving them credit… But to do a paid ad and have my likeness in it? Like this is what I do as well this is how I make my income as well. Isn’t cool in my opinion.”

“I’m truly sorry, tiktok doesn’t allow original stitch and then add an edited video on top and I’ve seen so many other people do it so didn’t think… It was a problem but I completely understand your frustration and I can only apologise!” Nguyen replied to Rogue in a comment.

Some viewers in the comments section of the two videos came to Nguyen’s defense, sympathizing with her as a young creator and saying, “Sorry you’re getting sm heat from the other creator. feels immature of her to not go to you directly and making a tok about you instead.” Nguyen liked the comment.

Passionfruit spoke with Alexandra Roberts, a professor of law and media at Northeastern University with expertise in influencer marketing, about the TikTok controversy. Roberts, who is also the former executive director of the Franklin Pierce Center for Intellectual Property, told Passionfruit that creators need to register copyright in order to sue for copyright infringement. However, they do not need to register to complain to platforms like TikTok.

“If the creator’s work was protectable and was incorporated into someone else’s work without their permission, that could constitute copyright infringement. While there are fair use doctrines that, in some cases, allow for the use of copyrighted work without express permission—for example, for criticism, parody, or educational use… When a use is commercial, like this one, that generally weighs against a finding of fair use, but it’s not dispositive,” Roberts said.

However, Roberts also said the amount of copyrighted content is used to determine if the use of it can be deemed “de minimus”—aka, not enough to be considered infringing.

“For example, if there’s a painting on a wall in the background of a movie scene, but it’s only visible onscreen for a second, that’s likely a de minimis use that would not be found to infringe the copyright in the painting. Whether a use is de minimis is fact-specific—there are no guidelines about number of seconds or percent of work used,” Roberts said.

Furthermore, Roberts said the amount of a creator’s copyrighted work used is considered when determining fair use.

“The smaller the proportion of the original creator’s work that gets used, the more likely the use is a fair use, but again the fact that it was incorporated into sponsored content is still going to weigh in the other direction. … The creator might also consider pursuing the maker of the second video for violating her right of publicity. The second video arguably constitutes a commercial use of the original creator’s image without her consent, which could meet the requirements of some states’ right of publicity laws,” Roberts said.

In addition to copyright infringement, Roberts said using others’ TikTok videos in ads without permission may violate the TikTok terms of service related to intellectual property. According to TikTok’s terms of service, “the use of copyrighted content of others without proper authorization or legally valid reason may lead to a violation of TikTok’s policies,” except in cases of fair use. TikTok suggests creators may find it easier to reach out to the offending user directly to resolve a dispute. However, it clarifies infringing content may be removed by TikTok, and users can report infringing content to be reviewed by the platform. Accounts with multiple copyright violations may be temporarily or permanently banned from the platform.

“This creator could also file a copyright infringement report to request the removal of the allegedly infringing content from TikTok. I’m not an expert in stitching but it also sounds like users can opt to not allow other users to stitch their videos, or can limit the ability to stitch their videos to only friends or mutuals, so that’s an option that creators should consider to help avoid seeing their videos used in this way,” Roberts said.

Professor Oren Bracha, an intellectual property law scholar at the University of Texas Law School, also spoke with Passionfruit about intellectual property. Bracha said whether a creator has any legal claim over the use of their video is highly dependent on TikTok’s terms of service.

“It mostly depends on the user agreement between TikTok and the poster. … There is a fair chance that it contains very broad wording that allows them either expressly or by implication to engage in said activity. … Is there anything express or implied in the user agreement that contractually forbids such an action with no permission from the poster? Again, I haven’t read the agreement, but it [is] quite unlikely that there is anything that expressly forbids it,” Bracha said.

Putting TikTok’s terms of service aside, Bracha also said that the strength of an argument for intellectual property would be dependent on how an ad is embedded.

“Generally it is not very likely that if the showing of the video itself is authorized, any intellectual property right is infringed by adding the ads. Again, it’s a different question that depends on the user agreement [for] whether there is a contractual right to prevent such use or a conditional license that the video may only be used without ads,” Bracha continued.

There are lingering questions about TikTok’s terms of service regarding creators’ videos being used in ads without express permission. TikTok, according to its terms of service, says it has “an unconditional irrevocable, non-exclusive, royalty-free, fully transferable, perpetual worldwide license” to the content created on its platform. As previously reported by AdAge, TikTok has used creators’ videos in its own advertising campaigns and was accused in 2019 of not notifying or paying creators for their content used in ads.

Correction: A previous version of this article misspelled Nguyen’s name. We regret the error.

Passionfruit reached out to TikTok’s public relations team for comment via email and did not hear back in time for the publication of this article.