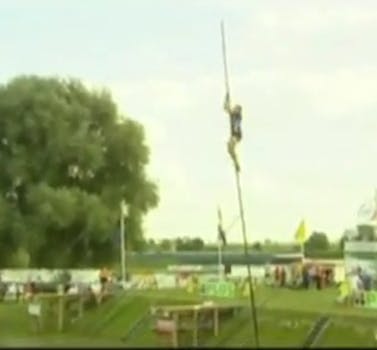 You have to see this foreign form of pole vaulting to believe it.

Equal parts pole vaulting, action-hero stunt, and Super Mario Bros. leaping, fierljeppen is a traditional sport of Frisians, a Germanic ethnic group from the coastal regions of Germany and the Netherlands.

Thanks to YouTube, the little-known sport, whose name translates roughly to “far-leaping,” is reaching stateside audiences.

Originally uploaded in Aug. 2009, a video of athlete Bart Helmholt setting a record for the sport hit the front page of the social news site Reddit on Monday, leading to nearly 180,000 views. Redditors were clearly fascinated by the foreignness of the endeavor. (The thread was titled “by far the most awesomest sport.”)

“Fjierljeppen!” posted Frisian redditor Menstruating_vampire in a top comment. “As a kid me and my dad used to do this all time! Originally it was used by frisian farmers to cross canals to reach certain parts of their land.”

In one of those wonderfully weird moments that spontaneously occur in Reddit threads, the comments turned into an impressive dialogue about the Frisian language—far more informative than what Wikipedia has to offer on the subject.

“Frisian, along with Scots, are the two languages most closely related to English. Frisian split off our its and English’s common ancestor a bit earlier than Scots did, I believe, and you have to take into account that Scots has continued to have extreme contact with English throughout the years, making for a very interesting collection of areal features and a dialect continuum with Scots at one end, a myriad of dialects between, and Standard Scottish English at the other.

However, that’s not what would make Frisian sound more similar to Old English than current English. What makes Frisian sound more similar than current English is that Frisian has been much more conservative in language change than English, keeping it more closely similar to the common ancestor English and Frisian share. English has, as you know, changed significantly since the Old English times. Invasions, language contact everywhere, etc.”

“Of all the languages outside of England, Frisian is the closest related language. That does not mean, however, that Frisians will easily understand English. This is because Frisian has undergone centuries of development away from England, and Frisian has received a lot of influence from Dutch. …

“Some words reveal that Frisian is indeed more closely related to English then any other European language. One example is the English word ‘key.’
In Dutch, it is ‘Sleutel’
In German, it is ‘Schlüssel’
These two words obviously share a common origin.
But the Frisian word is ‘Kaai’
Which suggests that the Frisian and English words for ‘Key’ share a common origin distinct from the German and Dutch origin.”

So there you have it: everything you needed to know about the Frisian language and fierljeppen.