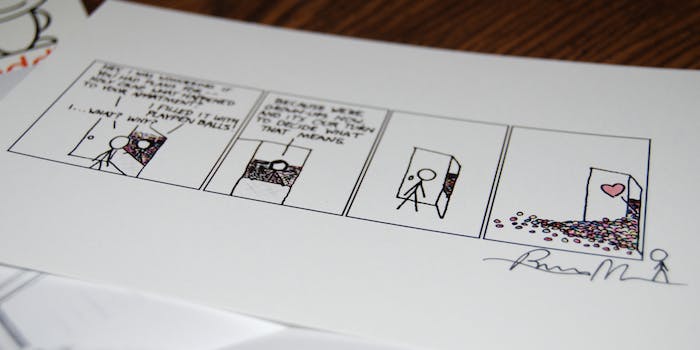 “soccer” was a conspiracy theorist who used his seniority at r/xkcd to promote subreddits like r/mensrights in the sidebar.

The controversial moderator of Reddit’s home for the populer Internet comic xkcd has been kicked off his own subreddit.

The moderator, who went by the name “soccer” on Reddit, was a conspiracy theorist and holocaust denier who used his seniority at r/xkcd to promote subreddits like Reddit’s controversial hub for men’s rights. Over his three-year tenure atop r/xkcd, soccer had banned moderators for disagreeing with him and shrugged his moderator responsibilities. He was never shy to pedal Holocaust denials, either.

In January the r/xkcd community started a petition to remove  him from the subreddit.

“He is an abusive mod,” the petition stated. “He linked to offensive and irrelevant subreddits that [xkcd creator] Randall Munroe would not want affiliated with xkcd. He censored content, promoted his own racist and sexist interests, and removed the mod who added CSS and did a great job of revitalizing the community.”

These sentiments were echoed by Munroe, who is also an early Reddit user.

“I can confirm that I absolutely would not want the kind of person who would link to r/mensrights, r/conspiracy, or r/theredpill in charge of any xkcd-related community. Ugh,” Monroe commented on Jan. 27.

Reddit staff occasionally kick out moderators from a subreddit if they’ve been inactive long enough and another redditor requests control. On Friday, soccer was stripped of his moderator role after two months of inactivity.

As a result, existing r/xkcd made quick work of reversing many of his controversial decisions. This included, among other things, unbanning everyone who was banned under /u/soccer (including AutoModerator shadowbans), replacing controversial sidebar links with one relevant to the comic, banning /u/soccer and all former mods under him, as well as known alts. Munroe was also added as an honororary mod.

The exit of soccer was celebrated throughout r/xkcd.

“If it turns out that the mods were forcefully removed, some were concerned that this sets some sort of ‘precedent,’ but the fact of the matter is that being reasonable is much more important,”  one user wrote. “This was such obvious bullshit and now it’s over.”

Photo by adamcaudill/Flickr (CC By 2.0)