Almost all posts featuring Tesla Motors, one of the most innovative automobile creators of the 21st century, have been prohibited from Reddit’s default subreddit r/technology.

It’s all taken place over the past three months. The ban, apparently instituted sometime after December 27, has just recently stirred up controversy on the forum. A large fraction of r/technology’s 4.9 million subscribers have taken to r/subredditdrama (where redditors discuss spats on other subreddits), r/teslamotors, and r/futurology (a forum devoted to “speculation about the development of humanity, technology, and civilization”) to gripe.

“Look, I’ll give whoever is responsible the benefit of the doubt,” redditor gamion told me. “Maybe there were too many Tesla posts and the filter was a knee-jerk reaction. But somebody set up a filter to remove 100 percent of the posts with the word ‘Tesla’ in it, yet still allowed any topics covering autonomous vehicles, driverless cars, or any other topics about the other car manufacturers that are working on this technology. So yes, that’s censorship.”

The only Tesla-related story allowed on r/technology in the past three months was from Engadget, posted Feb. 7.

Not one of r/technology’s top moderators has spoken out regarding this latest controversy, including mod and Reddit cofounder Alexis Ohanian (kn0thing).

On the other hand, a newer r/technology moderator Agentlame has been responding to criticisms all night from other redditors. Agentlame revealed that the Tesla removalals were because “battery cars aren’t ‘technology’ any more than than normal cars are. Brand favoritism isn’t a good reason to allow something that doesn’t belong.” Agentlame also added that car stories should be submitted to car-related subreddits.

These messages were shared with gamion and can be seen below (click here to see full size). 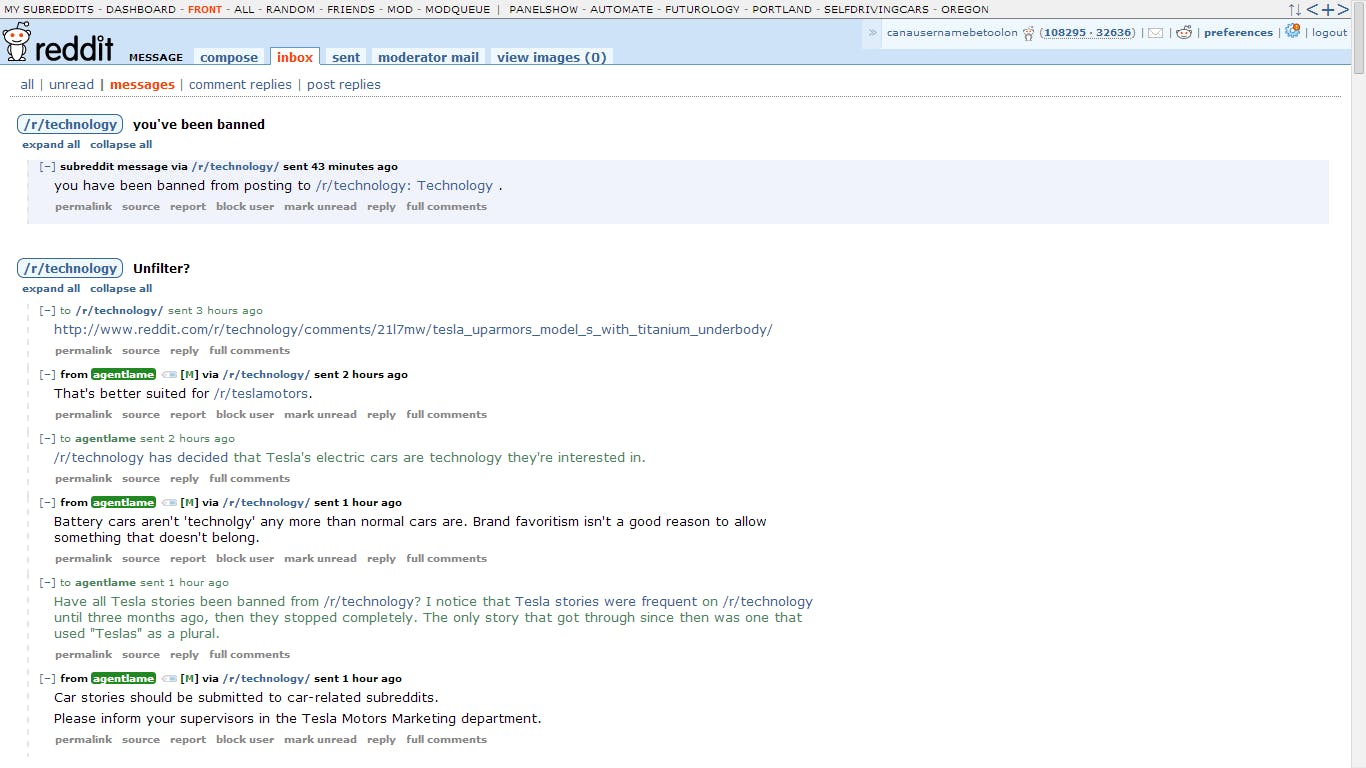 “If there were still some ‘Tesla’ topics being allowed I would be fine with their decision because it moderated the issue,” gamion added. “But instead there’s a blanket ban that one mod says is due to ‘brand favoritism’ and another mod that says ‘I don’t think all Tesla based posts are banned.’ Further to these two points, there is no mention of this official rule in the sidebar and there is clear brand favoritism for plenty of other companies and subjects.”

Gamion seems to be correct. In the r/technology’s sidebar underneath its guidelines, there is no mention of a rule banning “brand favoritism.” Furthermore, on r/technology today, there are posts about Valve, IBM, and Yahoo. The ban of any thread titles including the word “Tesla” was further given credence after a story Saturday regarding the companys Model S, Tesla’s award winning sedan, made it onto r/technology.

The r/technology drama comes a month after moderators in r/news, another default subreddit, prohibited all links to Glenn Greenwald’s “How Covert Agents Infiltrate the Internet to Manipulate, Deceive, and Destroy Reputations,” calling it analysis, not news.

Moderators are volunteer gatekeepers of subreddits who have the power to ban users and content that either break the official rules of Reddit, or rules instituted by each individual forum.

Mod positions, particularly those on r/technology, are coveted. All new Reddit users are automatically subscribed to these subreddits when they join. Most people never unsubscribe from them. And thanks to Reddit’s 112 million–plus unique visitors last month, a permanent home on Reddit’s front page results in a drastic increase in traffic and attention for sites submitted to these forums.

Following the the r/news drama, a moderator stated that “there is an argument to be made that perhaps the rules of /r/news barring analysis should be opened up to allow stories depending on context and importance.”

We messaged top r/technology moderator and power user qgyh2 regarding the Tesla dust-up. We’ll update the story if we hear back.

Update: On Sunday afternoon, an r/technology moderator announced that posts featuring the word “Tesla” in them will not be filtered out of the forum. Such filters are typically used to prevent spam.

“There are obvious flaws in this, I’ll admit, but it seemed like a good band-aid at the time,” skuld commented. “The filter is gone now, and we’ll look to have full human moderator coverage in future.”