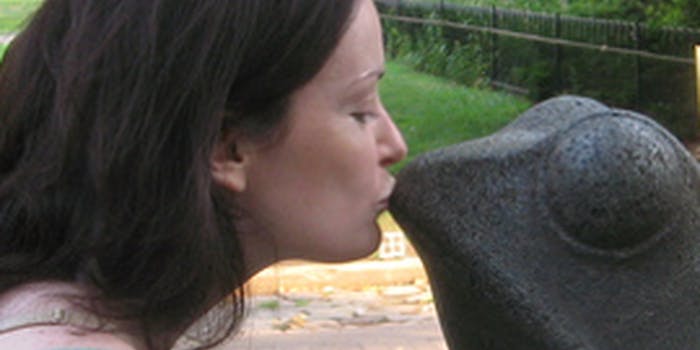 If you want to learn how to kiss, get off Reddit

Sillythrowaway0's1800 words of detailed advice on the subject garnered him Reddit gold and a Best-of mention.

According to Jezebel, one redditor’s guide on stealing your first kiss from a girl starts out on a good note before it turns creeptastic.

Considering it starts out suggesting you target the girl by getting her alone and making sure she has plenty of alcohol in her system before moving in for the kill—er, the kiss—we’re not sure there’s anywhere to go but downhill from there.

The redditor who posted under a throwaway account name to r/dating_advice earlier this week claimed he had “never dated/been in a relationship… I [m,21] want to know to take things further with her [f,21].”

Enter another redditor using an impermanent account, sillythrowaway0, whose 1800 words of detailed advice on the subject garnered him Reddit gold and a Best-of mention. Here’s the abridged version, in his own words:

TL;DR: Alcohol is your friend for helping you initiate. Kissing is a simple operation, don’t overdo it. Keep your technique relaxed, calm and gentle. Mind the spit when tongues get involved. Involve your hands and body, but don’t make a B-Line for her lady parts. Teasing is a tool, use it. Make her WANT you to touch her, don’t just work for approval. Most importantly, go with the flow. Things will happen naturally, how else do people learn? :D

On the surface this may seem pretty banal as far as advice goes, but the devil and the second-hand embarrassment are in the details:

Don’t pucker up. Don’t do any kind of weird sucking stuff. Don’t open your mouth. Don’t open your teeth. You are literally just going to touch lips. After a couple of seconds, very slowly and gently pull her chin a little bit closer, and very slightly open and close your lips. Do this a couple of times and you’re golden.

So… pull her chin towards you and make like a goldfish on her face. Sounds awkward. But apparently most Reddit readers thought it was a good idea. And as kissing advice goes, it probably isn’t the worst—at least until you get to the mind games:

When you go back in, instead of immediately kissing her, get in real close. She’ll be expecting you to make contact, but don’t. Pull back slightly. Make her come to you. Then pull back again. And again. She’ll hopefully laugh or lean real hard into it so you can’t tease her anymore. Don’t over use this though.

And then it takes (another) turn for the worse:

She may react negatively and push you back or say something like “What was that?” or “What are you doing”? Pay less attention to the words and more attention to the body language. If she doesn’t want you to do anything like that, she’ll stop you quickly and firmly.

Be playful. This is not the time for seriousness. This is time for FUN. Enjoy it.

Except that if the redditor is choosing to ignore what women are saying to him, there’s a chance that what may be “fun” for him may be threatening to his date. The thread in response garnered numerous examples of people talking about activities that may heighten sexual excitement for the participant but could be seen as menacing in other contexts. “When a girl [bites my ear during makeouts,] I tell her to be careful, I won’t be responsible for what comes next,” wrote JeepnAdd1ct.

“I like [to] threaten rape during makeouts too,” came the snide, widely upvoted retort from newguy001.

After Jezebel found Sillythrowaway0’s thread, he edited his post to clarify his remark about ignoring body language:

Don’t be rapey. The bit up there about her saying “What was that?” was making a point about paying attention to her tone and body language. I was trying to make the point that she could be saying that playfully or seriously. You need to always pay attention to the other person’s body language and tone. Being inexperienced, you might not realize which direction she is coming from. This does not mean you have warrant to be aggressive simply because she hasn’t said no. You just need to pay attention to her, and hopefully you’re able to pickup on the cues she’s trying to send you.

If you’re at all unsure of her intentions if she makes a comment like that, assume it’s serious. Safety first kids. But hopefully you can recognize signs of desire vs. signs of repulsion :)

Positive words. But given Reddit’s abysmal track record when it comes to the subject of objectifying women, creepy behavior, rampant misogyny, and rape, it seems many Redditors may be as unused to listening as they are to kissing.