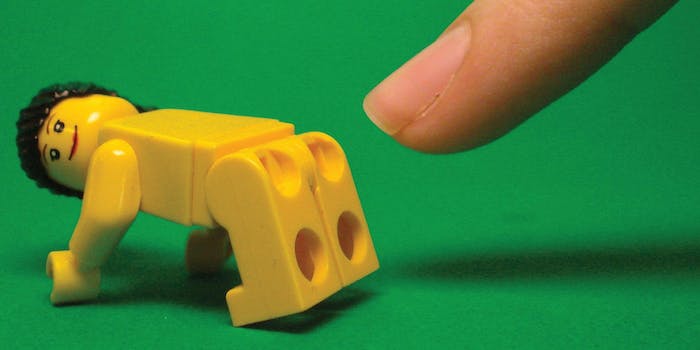 Lego master Alex Eylar has just combined the home of Reddit‘s most perverse comments with its favorite children’s toy.

Eylar, who is best known as redditor ICanLegoThat, has taken disturbing Reddit Gone Wild comments like “The things I’d do to get in bed with you,” “I’d give you a bellyful,” and “Damn good specimen” and illustrated them using Lego.

Eylar posted a link to a 15-image Imgur album on Reddit’s r/funny Saturday, where it has since been viewed more than 300,000 times.

One of the redditors responsible for one of the r/gonewild comments hopped in the thread to explain himself.

Eylar started ICanLegoThat in 2012 as a creative way to use his more than 30,000 Lego pieces. While Eylar’s r/gonewild interpretations have become his most popular Lego set to date, he’s best known for recreating famous scenes from films like Inception, American Beauty, and The Big Lebowski.

“I’d always been a LEGO fan, building whatever I felt like, and I’d always been a movie fan, so a clash was imminent,” Eylar told me in June 2012. “I built a few scenes—iconic scenes, things people would recognize—and it just kept going from there.”

Eylar’s Lego vignettes have helped him join shittywatercolour, animates_everything, and etch_a_sketcher as one of the most beloved Reddit novelty accounts.