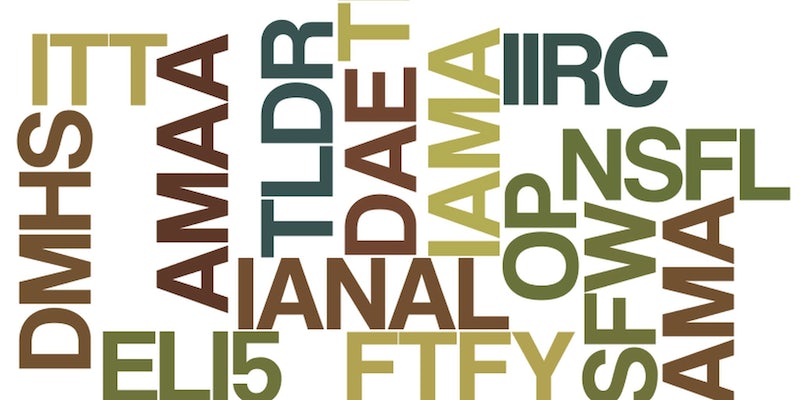 If you don't know the difference between IAMA and AMAA, you will appreciate this handy guide to Reddit lingo.

Reddit is an English-speaking community, but it may not always seem that way. In order to save time and address specific situations, a specialized lexicon has developed around the site. These phrases make communication more efficient for regular redditors but can sometimes leave casual users confused.

In order to clear things up, the Daily Dot has defined some common site terminology. Here are 20 of Reddit’s most colorful phrases and acronyms, demystified:

OP: Original Poster. The user who started the thread. See also: “OP will surely deliver,” a phrase used sarcastically after redditors ask the original poster to publish a follow-up thread.

AMA, AMAA: Ask Me Anything, Ask Me Almost Anything. Phrases that indicate that the OP is willing to conduct a Reddit Q&A.

IAMA: Short for I Am A, as in “IAMA body piercer that does house calls.” Like AMA and AMAA, this phrase is used to announce a Q&A session, usually in r/iama.

DAE: Does Anyone Else, as in, “DAE love animals, but hate P.E.T.A.?” Usually it’s something the OP thinks is far more common than suspected.

“Difficulty Level: X”: Refers to a successful feat that holds unique challenges for its subject. Often used in the racist meme “Difficulty Level: Asian,” which plays on the stereotype that Asians possess an advantage when it comes to accomplishing challenging activities.

DM;HS: Doesn’t Matter; Had Sex. A flippant conclusion to a story that at first glance seems tragic or simply bland, but since it resulted in the OP or commenter having sex, is regarded as a positive experience.

ELI5: Explain Like I’m Five. Basically: “Sum this topic up to its most basic explanation.” The expression comes from the subreddit of the same name, r/explainlikeimfive.

Ent: A denizen of r/trees, Reddit’s pot-smoking community. The term comes from the lethargic, unhurried treefolk from J.R.R. Tolkien’s The Lord of the Rings trilogy.

FTFY: Fixed That For You. An acronym that often follows a redditor’s correction of another user’s post. Usually, the “correction” is unnecessary and designed to make the comment funnier, but it is occasionally used for a genuine spelling, grammar, or fact fix.

“I have the weirdest boner right now”: An (almost) always inappropriate comment in response to pleasant/tragic/gross but never arousing news.

IANAL: I Am Not A Lawyer. Usually used to preface legal advice and remind users that it might be better to seek counsel from an actual professional over a stranger on Reddit.

IIRC: If I Recall Correctly. Similar to “Don’t quote me on this, but…”

ITT: In This Thread or In This Topic. Used to preface a reference to just that—something located elsewhere in the thread.

karmawhore: A person who is accused of posting just for the karma, Reddit’s internal scoring system. (When other redditors like a user’s comment or link, they upvote it. This collection of upvotes is called karma, and it’s displayed next to your Reddit username.)

TIL: Today I Learned, as in “TIL Russia has 11 time zones.” Most often used in r/todayilearned, this acronym is paired with astounding or little-known facts.

TL;DR: Too Long; Didn’t Read. If a redditor replies to your rambling post or comment in this way, you may need to edit it for length. Sometimes, the OP will use this phrase before summing up a long post.

“The old Reddit switcharoo”: An elaborate and well-maintained meme that archives every instance of a feigned ignorance joke. After the OP posts a photo of two objects in order to showcase one, a redditor will respond as if the other object is the one that is significant.

“Upboat”: An intentional mispelling of “upvote,” Reddit’s reward mechanism. A user’s collection of upvotes comprises his or her karma.