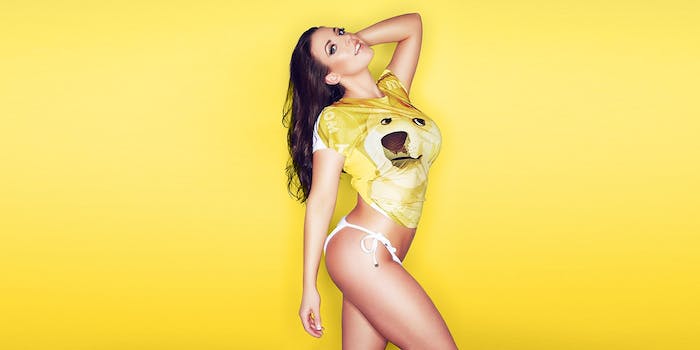 Such drama. Much censorship.

A pair of naked breasts has ruffled a lot of fur in Reddit’s top Dogecoin community, in what cryptocurrency enthusiasts have called a “CensorSHIBE DeBARKle.” The album was originally posted in r/girlsgoneDdgecoin where, like r/girlsgonebitcoin, women strip in exchange for virtual tips.

One of the two non-nude photos featured above was posted on r/dogecoin with the NSFW tag. It was removed by moderators for not being “family friendly,” a rule stated on the subreddit.

“It’s really sad to see that the post got deleted,” White commented. “Especially since, from what I read, it was only a bikini shot that was posted. I thought that the voting system put redditors in control of what they did and didn’t want to see. This is pure censorship. At least it’s started a conversation in the doge community about censorship… maybe something good will come of it.”

The removal of the post triggered strong reactions across the Dogecoin community, among which many considered the photo “PG-13” and not deserving of the NSFW tag.

“As it stands now, someone wearing a Dogecoin themed anything IS dogecoin themed by the very nature of it,” redditor tietsu commented. “Dress it [in] whatever sexual and moral grounds you want the end result is that we have people do and don’t want to see it. As it stands, I feel like it should have stayed and the mods should have made a change to the rules going forward.”

Dogecoin is a fledgling cryptocurrency based on a meme featuring a Shiba Inu pop. It was launched late November 2013 as a lighthearted alternative to Bitcoin and has since collected plenty of positive press.

This year alone, the Dogecoin community has donated more than $115,000 between a campaign to send the Jamaican bobsled team to the Winter Olympics, a sponsorship of a NASCAR racer, a luge athlete from India, and a clean water initiative in Kenya.

Since the dustup over at r/dogecoin regarding White’s photo, moderators have now banned any posts that are NSFW.