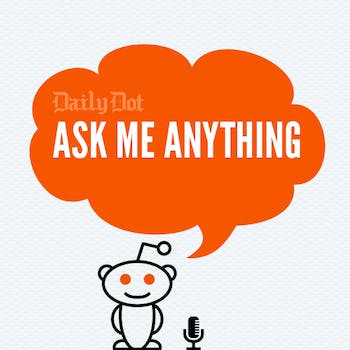 Politics, TV, and games made for an entertaining mix in r/IAmA.

Here’s another metric for just how terribly actor Woody Harrelson failed in his Reddit question-and-answer session: The infamous AMA (“ask me anything”) thread didn’t make the cut for this week’s best live interviews.

Sorry, Woody. While you were dogged by your raunchy reputation, this week redditors were far more interested in politics than sex.

Specifically, they grilled Sheriff Richard Mack, the man hoping to unseat Congressman Lamar Smith in Texas. Smith, you may recall, is the sponsor of the Stop Online Piracy Act (SOPA), and hence Reddit’s public enemy number one.

The 60-year-old Mack held his own and cracked a few jokes. He also took the top spot this week—an impressive feat, considering his competition included George Pelecanos, a writer and producer for HBO’s critical hit The Wire.

He also faced off with a controversial interview with a former engineer for Zynga, the hot online games company known for Facebook apps like FarmVille and CityVille.

1. I am Sheriff Richard Mack. I’m challenging SOPA and PCIP sponsor Lamar Smith (R-TX) to a Primary in a heavily conservative district. AMA.

Q: What is your opinion on the Citizens United Supreme Court case? What, if anything, would you do as a Congressman to address the issue of the lobbyists influence in Washington? (maximusDM)

A:  Any citizen has the right to lobby a representative.

What I have a problem with is the extreme amounts of money that flow to our congressmen. The biggest problem I have is that huge corporations donate to both parties corrupting the system. If our politicians had an ounce of integrity, they would stop that sort of thing. I intend to work towards that.

Q: What is your favorite memory from your time working on The Wire? (redditsforsheep)

A: Probably the night we shot the scene between Stringer Bell and Avon Barksdale (Episode 311, Middle Ground), on the roof, when they talk about their friendship and childhoods. They have betrayed one another but there’s real love there. It was a beautiful night in Baltimore and the actors and the director, Joe Chappelle, really brought their game. It’s my favorite scene of the series.

Q: Do you think it’s pointless for so many people to be on antidepressants simply because of seasonal affective disorder? Do you think light therapy would be more efficient? If so, why don’t more psychiatrists use this technique? (sajisavat)

A: It’s a great question as to why psychiatrists don’t use light therapy more. They certainly should. I think a lot has to do with economics. Drug companies spend a lot of money to “educate” doctors to prescribe drugs. Don’t get me wrong. I prescribe drugs — but usually I prescribe light first for seasonal affective disorder.

4. As requested, IAmA man who was in an extended coma for a period of 4 months. AMA.

Q: How was the wake up experience? As in were you surprised in a hospital or was there people with you, etc.? (Meowmixmyanus)

A: No, at first when I woke up, I had no idea I was in a hospital. From what the staff told me eventually, it took about an hour for me to accept that I was in a hospital due to injuries. When I asked about my wife and the kids, they responded “Well we just need to get you better first.” I knew at that moment that they were gone.

5. I remodelled an elementary school that is now my house AMA.

Q: What’s the most interesting thing you’ve found, leftover from when the school was active? (bopie)

A: Like I had mentioned, everyone that lives around here went to school out here, so people stop by all the time to just look around and tell stories about when they were there. there’s been quite a few “I got my nose stuck in that corner for being bad” kind of stories.

A: My music is almost entirely made up the following way: I will begin to experiment in an altered tuning and come up with a progression or riff. After that I will start to hear melodic ideas. Finally, I will try to find a way to play them together at the same time.

A: Spying on players. Getting intimate gaming data, their habits, their networks, and how to effectively monetize given X.