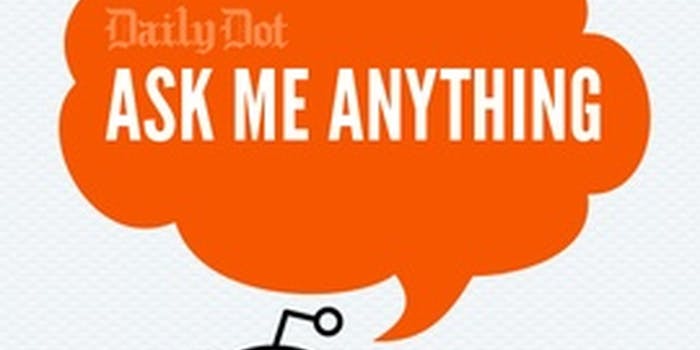 Surprisingly, the IAmA interview that didn't go medieval was the one about the breast implants.

Reddit’s live Q&A forum, r/IAmA, is still reverberating from last week’s Internet blackout over the Stop Online Piracy Act. The Electronic Frontier Foundation stopped by specifically to thank and chat with redditors for their role in killing SOPA. Yet another aspiring politician—Dr. Michael Ham, an accomplished scientist—introduced himself, citing the injustice of SOPA as a major reason for him to run for office.

Otherwise, it was the usual cornucopia of characters. A meth addict answered questions while high. A woman who just got breast implants attempted to satiate redditors’ curiosity about boobies. A former Medieval Times employee gave a look behind the scenes.

Below, we’ve compiled the top seven posts (seven being our lucky number) from Reddit’s r/IAmA this week. We’ve also included a sample question and answer from each. For the complete list, check here.

1. We are the IAmA moderator team. Ask us anything.

Q. What’s been the most unbelievable AMA that turned out to be verifiable? (pickledinevil)

A. Easily this one, in my opinion. [Link to “IAmA Man who had a sexual relationship with his mother.”]

Q. How long does it take to trace a location from a call? (Guatemaulin)

A. [W]hen you call 911 – It’s not instant. Sometimes (androids, iphones) it can be near instant – but other times, it takes 2-5 minutes. The first “location” data we get is the cell tower you call from, then any gps coordinates. The cell tower may not even be the nearest available, but it’s just the one your 911 call was routed too.

Also, if your phone doesn’t have GPS, it can take 30 minutes to 24 hours for the phone company to trace it.

3. Hey Reddit, we’re the activism team at EFF. Thanks for all you did to defeat SOPA! – AMA.

Q. What’s your opinion on the current FBI wave of shutting down various file-sharing sites? (ImplyingImplicati0ns)

A. We’ve long been concerned that the seizures, done mainly by ICE (not the FBI), are a violation of free speech and otherwise problematic. That’s easily seen in Megaupload, as so many ordinary, noninfringing users of the system had their speech removed.

But the existence of these seizure powers also demonstrates that the main RIAA/MPAA claims about SOPA and PIPA are unfounded. Megaupload was once held up as an example of why SOPA and PIPA were necessary, yet less than 24 hours after it was indefinitely shelved, the government was able to seize Megaupload’s domains and arrest its owners. Remember, they arrested a German and Finnish citizen, in New Zealand, whose company was incorporated in Hong Kong. The U.S. government doesn’t need any new laws; they have too much power as it is.

Q. Is there anything deemed “disgusting” by others that you love and think should be big in American culture? (radi3423)

A. There are plenty of foods that i wish were more popular here but tops on the list is donkey. It’s AMAZING tasting, like veal, but with a little more oomph. In China, Italy, South America they are very popular and I think if more Americans tasted them it would open doors to a more sustainable eating system in our country.

Q. What is the one girl of all of them you’ll always remember and why? (artideco)

A. One that we didn’t ever get on camera, but here’s the scene:

It’s after 2 am, and the club we were at that night has pretty much cleared out. This night was a “foam party,” meaning that after a certain hour the dance floor was filled with an ever replenishing supply of “foam.” The kids dance in it, grind in it, do god knows what in it. But, by the end of the night, the foam is reduced to a milky, filthy, pool of warm water, maybe 6 or 8 inches deep.

We’re packing our gear when I look up and see some sad, clearly intoxicated girl, on her hands and knees in the foam, desperately searching for her wallet she had lost on the dance floor.

It just seemed to sum up so much of what the whole experience was like, that it’ll forever be burned into my mind’s eye.

6. Today I spend my morning in the woods were my brother was murdered, with the detective that found his body. AMAA.

Q. Would you be willing to share details of what you remember from the time, e.g. how you found out or what the next few days were like for you and your family? (evaluatrix)

A. I remember very clearly how I found out my brother was dead. My mother walked into my room to talk with me, sat me down on my bed and told me, “They found your brother in the woods and he is dead.” In my childish mind I quickly asked, “Did a bear get him?” My mother just said, “I don’t know” and we both cried, for a long time. The days after that are a blur and I have very little recollection of what happened.

Q. Is it really better/faster to drive as far up as possible when coming to a lane closing? i.e. “the zipper effect”? (tek0011)

A. I hate those people, and I *was an active blocker. But yes, I believe that those jerks make better use of the road’s capacity and better for us all. Safer? Doubt it.

EDIT: Yes, it is best to merge late.