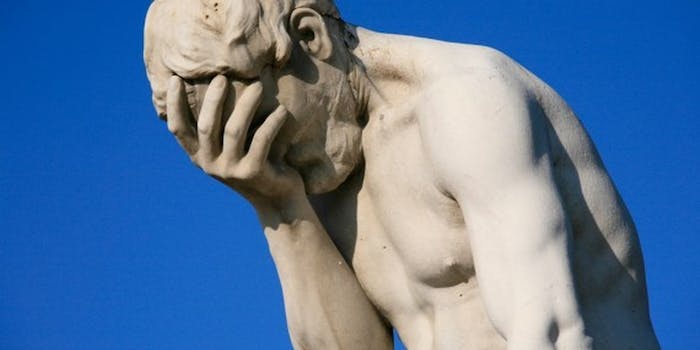 Witch hunts, charity scams, and sexism—a look at the disturbing dark side of the social news site.

There may be no better place online to whip up overwhelming support for a good cause. But hiding just under the surface lurks one of the Internet’s nastiest (and, sometimes, just plain stupid) hiveminds.

For a social news site that does so many good things, that’s all quite embarrassing.

Thankfully, Reddit’s collective psyche can also be highly self-critical. Earlier this month, redditors compiled all these terribly embarrassing and sometimes sickening moments into a single, massive list. The whole thing is worth reading. If you’re an active (and conscientious) redditor, you may cringe in painful memory as you read it over.

Here are six events whose awfulness should be recorded for eternity.

Widespread sexism is Reddit’s constant shame. Indeed, there are almost too many instances to choose from, but there’s one that stands shamefully above for the rest.

In December 2011, redditor theoculus posted about a sexual assault she had suffered. She had a photo—showing a nasty bruise on her left cheek—to prove it. Other users apparently stalked through her submission history and discovered she was a pretty talented make-up artist. That shouldn’t have meant a thing, but to those amateur sleuths it was a sure sign theoculus was a fake. They called her out in top-voted comments. Of course,  it wasn’t a hoax. Theoculus posted a video showing she couldn’t wash off the bruises.

The redditor who first called her out apologized, but the damage had already been done.

The moderator of Reddit’s largest marijuana community, Shaun Apple, had a simple plan: Use his community’s tremendous generosity and pot-powered good will to launch a charity. Unfortunately, Apple wasn’t so experienced with the whole charity thing. Before accepting donations for the charity, he probably should have created it first. Users revolted with digital pitchforks, and Apple’s moderatorship went up in vapor. He resigned.

Identifying scammers on the Internet is hard. And unfortunately for every person redditors falsely  accuse—as in the theoculus case—there’s a legitimate scammer and troll lurking in the shadows.

In 2011, redditor lucidending pretended to have cancer and wanted to share his dying moments with the community, stirring up a frenzy of enthusiasm and support for almost a week. He was a fraud, though, as The Oregonian discovered.

4)  Reddit falsely accuses a kidney donor as a fraud

Redditor BadgerMatt offered a firsthand account of this embarrassing moment:

“I donated a kidney and did an [“ask me anything”]. Some jackass claimed my pictures were fake and that I was trying to steal money (I asked for donations to the American Cancer Society). I woke up the next morning to death threats and the top post on Reddit. People were literally calling me. I had to post my actual doctor’s records and then finally a Reddit doctor came on and verified that I was real.”

“Reddit felt bad and donated $5,000 to [the American Cancer Society] though.”

Reddit is a powerful place. It can get you a job or help raise a few thousand dollars for your favorite charity. It can also get you fired.

All nyan_all_the_links wanted was to share free Steam game codes with other redditors. He was sitting on about $8,000 of merchandise, which he’d gotten free from work. Predatory jerks were watching, however, and soon dug up the generous redditor’s personal details. They threatened to blackmail him and harassed him at work, calling his workplace hundreds of times in a single day.

Soon enough nyan_all_the_links got dumped from his job. He hasn’t given up on Reddit, however.

Kevin Henry was one of the world’s few owners of a Jurassic Park-style Jeep. So when it was damaged during transport to a video game convention, Henry turned to Reddit’s massive r/gaming community for sympathy. What he got was a witch hunt against Telltale Games, the company that had borrowed it for the conference. Some people at the company received death threats. One anonymous caller threatened a former Telltale employee with rape.

But it turned out Telltale Games wasn’t even at fault. The transport company had done the damage.