The creator of Reddit 3016 thinks his satire hit a nerve.

A man who spent two years designing an elaborate Reddit parody that peers 1,000 years into the site’s future has said that Reddit admins are conspiring to censor his project from behind the scenes. Apparently they don’t appreciate his bleak, hilarious vision of a future society plagued by all of Reddit’s current problems (made even worse by technological advances).

Blair Erickson’s Reddit 3016 project is full of headlines like “NEW SUBBREDDIT: /r/ShameSingularity – all humiliation across the universe will be transcendently absorbed, experienced and shared in total. Join us. [formerly r/cringe]” and “ViacomcastelemuNBCitibank absorbs remainder of the Pegasus Galaxy.” Many links lead to articles on futuristic parody versions of the Huffington Post and Imgur.

In his far-flung dystopia, perverts can download schematics to clone pop stars for sex and “JusticeEnforcement troops” terminate entire colonies on a whim. Also, pickup artists now have “neg rays” and people post pictures of their ancestors’ pet cats. Erickson has clearly put a lot of time and thought into his loving(?) mockery of Reddit culture. 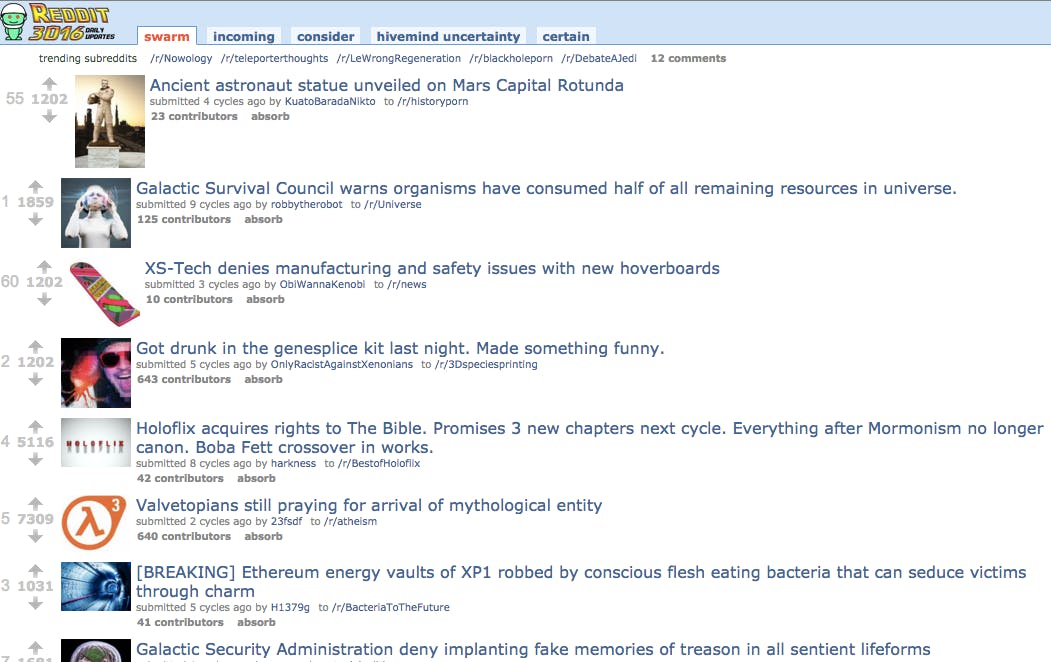 But just as Reddit3016 started to get some attention on major forums like r/funny, he said, moderators stepped in to squash it.

In a screed posted to his subreddit late last week, Erickson claimed links to his work had disappeared across Reddit, and accused the moderators of an authoritarian conspiracy.

“After it was shared by myself and others, it has quickly and inexplicably been erased by behind the scenes Reddit censors in every subreddit it was shared in,” he wrote. “Censors deleted it from /r/funny as soon as it hit the Top 50. No explanation given why the 10 million people of that community should not be allowed to see this. The moderators did not reply to my messages asking why. I guess the corporation Reddit that really controls this ‘community’ did not appreciate our sense of humor like the rest of the people here did.”

He wouldn’t be the first to accuse Reddit’s unelected moderators of colluding to block content they don’t like, or even claim a conspiracy that goes all the way to the top of  “the corporation Reddit,” but there may be an alternate explanation here.

Reddit has rules against relentless self-promotion—that is to say, sharing one’s own content and little else. It’s been a sore spot for redditors in the past, especially bands and artists hoping to get their work noticed. When a submission carries the whiff of self-promotion, particularly if the submitter stands to make a profit, mods tend to strike it down with prejudice. Although Erickson isn’t running any ads on Reddit 3016, he may be a victim of moderators strictly enforcing those rules.

Because Erickson’s work satirizes Reddit itself, it’s still tempting to see it as a target of censorship. But Reddit denies that’s the case.

In a statement, Reddit said that although some individual mods may have seen fit to remove links to Reddit 3016, the company is officially impressed with it:

Reddit3016 is just one example of our platform’s ability to attract a variety of users who invest a lot of time and energy into building things people love. Our dedicated moderators are trusted to create and run communities as they see fit to best support each subreddit’s subscribed users.

While some communities have opted to remove the link, many have approved its placement. We have over 10k active subreddits and just like any large group, opinions and needs can vary. Reddit, Inc. is impressed with the creativity and thought behind Reddit3016 and looks forward to the continued conversation around its content.

And Erickson has at least one prominent supporter inside the grand Reddit conspiracy: co-founder and executive chairman Alexis Ohanian, who tweeted Tuesday that whoever created Reddit 3016 is his hero.

Whoever created this is my hero. Now we know what reddit will look like in 1000 years. https://t.co/tgFplY16sn