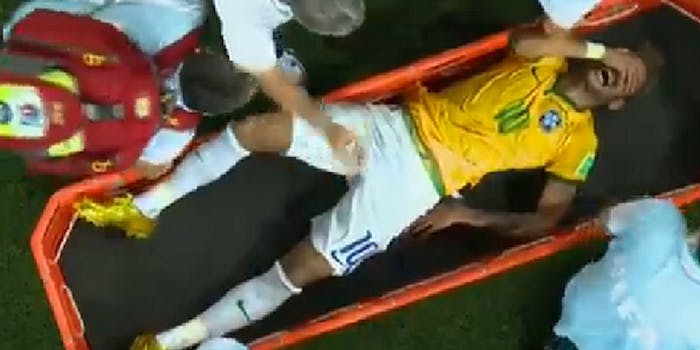 This is an obvious statement, but spoilers ahead.

Brazil’s samba with destiny will take its World Cup campaign to a headliner, semifinal duel with Germany next Tuesday. Colombia possessed and tried every possible angle Friday in Fortaleza, but the Brazilians finished the task 2-1 on the backs of individual, genius fits.

Brazil can thank Thiago Silva’s swarming and vertical defending on set plays, his back line organization, and a tab-opening seventh-minute goal.

But the victory proved costly. Silva’s yellow card in the 64th minute makes the Brazilian captain ineligible to play against Germany. Global playmaker Neymar was carried off the field on a stretcher after what appeared to be a back injury. Make no mistake, it could have been a minor tweak opportunistically played to milk clock, but his status remains in doubt.

Neymar taken off on a stretcher… pic.twitter.com/isUb0dSR0n

For his part, James Rodriguez can take consolation in being the World Cup’s breakout star–leading Colombia to its first ever quarterfinals appearance, scoring six mature, magic, tournament-leading goals in the process. The 22-year-old Monaco winger matured into a veritable attacking ace, and is now the undisputed go-to guy for his country’s big moments. After a Julio Cesar yellow card on a dangerous challenge in the box, Rodriguez scored the chip shot PK in the 78th minute like an opportunistic vet trying to pad his career highs.

But while a major European club will throw money at his boots this summer, a reckless, over the ball challenge led to this dagger free kick from Chelsea defender David Luiz in the 69th minute.

With the first two weeks playing out like a purge of stalwarts that saw four top 10 teams eliminated in the group stage, the blue bloods are picking up the scraps and meeting at the end.