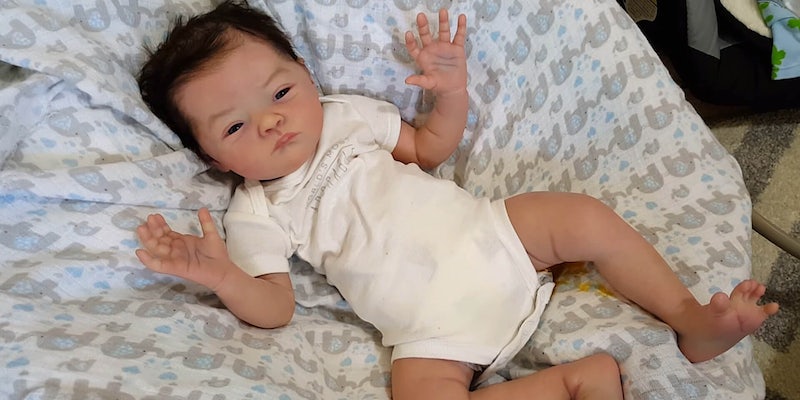 Inside the online communities for reborn doll artists and collectors.

Imagine you’re a Target employee and you see a baby plummet from a high shelf. You rush over to help the baby’s family, heart pounding, but they appear totally unbothered. In fact, they’re laughing.

This is one of the many surreal scenarios the Patsy family has found themselves in since they started making YouTube videos featuring extremely lifelike baby dolls. Though the dolls belong to 10-year-old Madison Patsy, her father Steven enthusiastically participates in scenes with the dolls, as well—the family now writes them off as business expenses. Steven is not the only adult to purchase and play with lifelike dolls, though he understands many see the pastime as “weird.”

Most adults who enjoy hyper-realistic baby dolls, known commonly as “reborn dolls,” or simply “reborns,” say they are more than just dolls. Depending on who you talk to, they’re collectors’ items, scene partners for popular YouTube videos, or vehicles for therapy—comforting those who’ve lost children and bringing joy to the eldery. But perhaps above all, they’re art, and the people who make them are artists who can sell their work for hundreds or thousands of dollars. These artists are incredibly accomplished at making vinyl or silicone doll parts look shockingly real.

They’ve learned their craft from one another, finding fellow enthusiasts on social platforms and online forums—the only resources readily available for those involved in what’s widely viewed as an unsettling hobby. Though reborn dolls have gotten more mainstream over the years thanks to ample media coverage, they still lurk deeply enough in the Uncanny Valley that social networks are the main avenue for physically isolated enthusiasts to find others who share their passion. Reborn doll fans are not alone, the forums suggest, and what they’re doing isn’t that weird.

California-based reborn doll artist Stephanie Ortiz learned about reborns in 2011. Her wife, Jackie Ortiz, was into Mattel’s Monster High dolls at the time, which fell out of favor because “parents said they were too sexual,” says Stephanie (the dolls were aimed at young children and had bios emphasizing hobbies like waxing, shaving, and “flirting with boys”). In searching for Monster High dolls on eBay, Stephanie and Jackie came across reborns. A lifelong fan of baby dolls—despite her otherwise tomboy proclivities—Stephanie was impressed by how real these dolls looked.

“My wife was like, ‘Well, you don’t want anything for Christmas. Why don’t I just get you one of those dolls?’” Stephanie says. She was 27 years old at the time, and getting a doll for Christmas sounded ridiculous. But her wife reminded her that she liked the doll. “What’s wrong with that?” Jackie had said.

Soon, Jackie realized she could make these dolls herself. After trial and error, she’d managed to paint a reborn that looked just about as lifelike as the one Stephanie had ordered online. Jacki painted a doll she’d ordered from a sculptor’s doll kit, as doll creators usually specialize in either sculpting or painting, not both. “I am not an artist,” says Stephanie (she used to run landscaping companies), but she learned the materials and techniques from a combination of her wife and a video tutorial Jackie had purchased. Designing reborns is now Stephanie and Jackie’s full-time livelihoods, and they teach classes on doll painting—though classes aren’t common.

“You have to actually find other people to learn from and then change it into your own technique,” Stephanie says.

You can find reborn doll enthusiasts on Instagram, Facebook, and YouTube, where Stephanie has had a channel since 2013 (called nlovewithreborns2011) that now has about 364,000 subscribers. The about page reads, “I started this channel so I could find other people my age who have a love for reborn baby dolls.”

It worked. Stephanie is well known in the reborn community (“famous,” she says), and her audience has grown to the point where she now meets other reborn enthusiasts on her Patreon page, “where people can pay to be part of an area where they’re able to just share their doll, and nobody’s going to judge them,” she says.

Plus, growing a YouTube channel is all about collaborating with other YouTubers who share your interests. That’s how Stephanie met the Patsy family. She provided a reborn for a viewer giveaway when the family’s channel hit 100,000 subscribers. They now have more than 339,000 subscribers.

You don’t have to have a thriving YouTube channel to meet other reborn enthusiasts. Reborn artist Julie Beck connected with others who shared her hobby on the Bountiful Baby forum, after first coming across the dolls on eBay, like Ortiz. “I also posted on a community buy and sell website asking if anyone in the area had any knowledge of how to make the dolls,” Beck said via email. “A woman who lived about 25 miles away responded to me and we met for lunch and she gave me some supplies and some advice.”

Beck, now an established reborn artist, continues to post on the Bountiful Baby forum. In addition to helping Beck “realize it wasn’t so weird that I, as a grown woman, had a desire to collect realistic dolls,” that forum and others, like DollFan, taught her pretty much all she knows about designing reborns. She learned from others online how to weight the dolls so they felt like real babies (they often fill the dolls with glass sand-blasting beads), how to “root” their hair, and how to paint special effects, like cuts and “stork bites”—the kinds of injuries newborn babies get when they’re delivered by long-legged birds.

“There was also an off-topic section of the forum where people posted personal stories and supported each other in other parts of life,” Beck writes. “It was in that part of the forum that friendships were formed.” People she’s met through “dolly” forums have supported one another through illnesses, she said. She gets together with a group of reborn enthusiasts once a year for a “dolly weekend” and attends doll shows, like the Rose Doll Show—the biggest one in the business, run by the same people who operate the Bountiful Baby forum.

During her first Rose Doll Show, Madison Patsy met “about 75 kids her age” who enjoy the dolls as much as she does, says her father. Mostly female, the reborn doll demographic ranges widely in age, from children to women in their 70s. Kids at school tend to tease Madison for her hobby, but at the Rose Doll Show, she and her family found a group of people who were “warm and inviting and loving and nonjudgmental,” says Steven.

The community is tight-knit, says Beck, but it’s “growing all the time.” Meanwhile, the artwork is evolving.

“I don’t know, you just hold one and there’s this nurturing part of you that comes out… It’s weird,” Steven Patsy says. “You just have to hold one to really experience what I’m talking about.”

Everyone I spoke with about reborn dolls said the goal was for dolls to look as lifelike as possible. Bountiful Baby, according to Steven, now conducts 3D scans of actual babies to create the pieces in its vinyl doll kits. Silicone dolls, which feel closer to real babies, are more expensive. “You’re talking thousands and thousands of dollars,” says Stephanie.

Dolls are also weighted to feel as real as possible, with heavy heads and bodies between three to four pounds. “If you put eight pounds into one of these dolls, it would not feel lifelike,” says Stephanie, “because it would be dead weight. A newborn is not dead weight.”

This is where the hobby starts getting especially unsettling for outsiders.

“Some people are creeped out by them,” says Steven. Some even feel “tricked” by the dolls’ hyper-realistic appearances. People have approached Steven holding a reborn to coo over the cute baby, only to recoil when they realize it’s not alive.

But, Steven adds, people change their tune when they hold the reborns, shifting immediately from creeped out to genuine fans. He has trouble articulating why.

“I don’t know, you just hold one and there’s this nurturing part of you that comes out… It’s weird,” he says. “You just have to hold one to really experience what I’m talking about.”

Reborn sculptor Aleina Peterson, a mother of 10 who lives in Salt Lake City, Utah, says the same thing. “I think it’s the love of babies, that motherly instinct…there’s just something about it.” Peterson’s met people at doll shows who couldn’t have babies, lost babies, or watched their babies grow up. For them, reborns serve as a comforting substitute. Peterson has also watched residents at elder care facilities hold the dolls, and “their eyes just light up—it awakens something in them,” she says.

In 2016, a study in the Lancet medical journal found that teenage girls given “simulator babies” to help deter them from teen pregnancy served the opposite purpose. Girls who had “cared for” the baby dolls ended up more likely to move forward with teen pregnancies. “They became extremely attached to the babies,” says the study’s lead author, Sally Brinkman, “and they didn’t want to give them back to the school.”

Even though Stephanie acknowledges the importance of these dolls feeling and looking real, she’s opposed to emphasizing the dolls-as-therapy narrative. “A lot of people want to say that dolls are for therapeutic use, but drinking a Diet Coke is therapeutic,” she says. “I’m here to normalize a hobby… Nobody says, ‘Hey, here’s my Hot Wheels collection. It makes me feel happy.’ Right?”

Stephanie has had some success in “normalizing the hobby” already. She recently provided a set of reborn “twins” to two popular teenage YouTubers. The teenage girls showcase their new dolls in a video titled “We Adopted Twin Babies – Gender Reveal!” on the channel AllAroundAudrey, which has more than 1.8 million subscribers and covers mainstream topics like beauty tips, product reviews, and cooking challenges. The comments below the video are an endless scroll of viewers suggesting names for the new twins.

While the internet has helped to spread knowledge of and interest in reborn dolls, it’s also had some negative effects on Stephanie’s livelihood. Doll sales have gone down in the past six months, Stephanie says, and “they’re not really picking up.” The market’s grown saturated.

“Way too many people think, ‘I can do this,’” she says. People in China have also started making the dolls, using inauthentic photos to advertise their wares, says Stephanie, “so people are getting screwed over” when they buy. This results in less overall trust from potential customers, who have been sent bad products after being misled by digital pictures.

But reborns have a promising future, says sculptor Peterson. She sees adult enthusiasts bringing their children to doll shows and passing along the hobby, even encouraging them to try painting reborns themselves.

Other industries are interested, too. One of Peterson’s dolls ended up in an episode of former ABC series Army Wives, where it held the place of a baby wearing an oxygen mask in the hospital. Peterson says she was even asked to help create the backside of the cover for the Nirvana album Nevermind—the front features a picture of a real baby in a swimming pool—but turned them down (she wasn’t familiar with Nirvana, and didn’t have the bandwidth). Lately, she’s been speaking with a doctor she knows about possibly providing some lifelike dolls to pediatricians.

“I think [reborns] have the potential to spill over into other areas,” she says, adding, “There will always be a love for dolls and babies.”

Update 6:40am CT, Aug. 31: An earlier version of this story misspelled the first name of Steven Patsy.